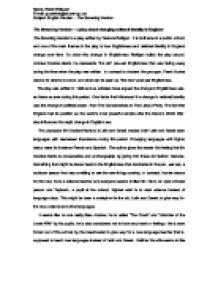 The Browning Version - Mr Crocker-Harris - one of the main themes in the play is how Englishness and national identity in England change over time.

The Browning Version - a play about changing national identity in England The Browning Version is a play written by Terence Rattigan. It is built around a public school, and one of the main themes in the play is how Englishness and national identity in England change over time. To show this change in Englishness Rattigan builds the play around Andrew Crocker-Harris, he represents "the old" pre-war Englishness that was fading away during the time when the play was written. In contrast to Andrew, the younger, Frank Hunter stands for what is to come, and what can be seen as "the new" post-war Englishness. The play was written in 1948 and as scholars have argued the change in Englishness was as fierce as ever during this period. ...read more.

Emerging languages whit higher status were for instance French and Spanish. The author gives the reader the feeling that Mr Crocker-Harris is conservative and unchangeable by giving him these old fashion features. Something that might be traced back to the Englishness that dominated in the pre-war era, a stubborn person that was unwilling to see the new things coming. In contrast, Hunter stands for the new, he is a science teacher and everyone seems to like him. He is an open-minded person and Taplow's, a pupil at the school, highest wish is to start science instead of language class. This might be seen a metaphor for the old, Latin and Greek, to give way for the new, science and other languages. ...read more.

In conclusion, Rattigan's play The Browning Version tackles the change in Englishness and England's national identity. He does so by giving Mr Crocker-Harris features that were interrelated with the Englishness before the Second World War and before The Labour Party won the election and laid the ground for the welfare state. The most prominent of all these features are the shift in importance of the Latin and Greek language. Other features that Andrew possesses that are connected with the old Englishness are his way of being strict and authoritarian and his reluctance to accept new things coming. In contrast Hunter stands for what is new and gives a picture of what is to come. ?? ?? ?? ?? Name: Robin Eriksson E-mail: [email protected] Subject: English Studies - The Browning Version ...read more.