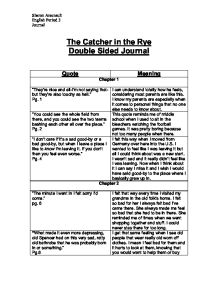 The Catcher in the Rye Journal Personal responses to the text

The Catcher in the Rye Double Sided Journal Quote Meaning Chapter 1 "They're nice and all-I'm not saying that-but they're also touchy as hell." Pg. 1 I can understand totally how he feels, considering most parents are like this. I know my parents are especially when it comes to personal things that no one else needs to know about. "You could see the whole field from there, and you could see the two teams bashing each other all over the place." Pg. 2 This quote reminds me of middle school when I used to sit in the bleachers watching the football games. It was pretty boring because not too many people when there. "I don't care if it's a sad good-by or a bad good-by, but when I leave a place I like to know I'm leaving it. If you don't then you feel even worse." Pg. 4 I felt this way when I moved from Germany over here into the U.S. I wanted to feel like I was leaving it but all I could think about was a new start. I wasn't sad and It really didn't feel like I was leaving. Now when I think about it I can say I miss it and I wish I would have said good-by to the place where I basically grew up in. Chapter 2 "The minute I went in I felt sorry I'd come." pg. 6 I felt that way every time I visited my grandma in the old folk's home. I felt so bad for her I always felt bad I've came there. She always made me feel so bad that she had to be in there. She reminded me of times when we went shopping together and stuff. I could never stay there for too long. "What made it even more depressing, old Spencer had on this very sad, ratty old bathrobe that he was probably born in or something." ...read more.

I stopped that though. Now I go to work in the mornings on the weekends so that gives me something to do. "I spent a king's ransom in about two lousy weeks." Pg. 107 I spend a lot of money when I go shopping in the mall sometimes and then I have to pay my parents back when I get my paycheck. I sometimes spend so much money on clothes that it takes two of my paychecks, it stinks. But I can't help it. "Then we both asked to be moved. And the funny thing was, I sort of missed him after we moved, because he had a helluva good sense of humor and we had a lot of fun sometimes." Pg. 109 I used to share a room with my sister when she had moved in with us for a while before she could move into her own apartment. Well, we had fights and stuff, but when she moved out I really missed her like crazy, because no matter how many times we fought we had a great time together and I missed that more than ever when she moved so I can understand how Holden must have felt. Chapter 16 "My aunt is pretty charitable-she does a lot of Red Cross work and all..." pg. 114 My aunt is the same way. She used to work for Red Cross until her husband passed away two years ago. Then she stopped. She did anything really to help others. She was a very generous woman and I really respect her for that. "I can understand somebody going to the movies because there is nothing else to do, but when somebody really wants to go..." pg. 116 When I am really bored then I might go to the movies but I never want to go there. I think that it's more a waste of money since the movies will come on TV sometime it makes no sense to go to the movies. ...read more.

My sister and I were fighting and when I had enough I ran straight across the street. It was a main street too so there was usually a lot of traffic. I didn't care though because I was so mad all I wanted to do was get away from her. I was scared and so was she so once I was on the other side she asked me if I was stupid so when she sad that I just kept on running until she ran after me saying sorry. Chapter 26 "I mean how do you know what you're going to do till you do it? The answer is, you don't." pg. 213 I don't know what I am going to do until I do it. I don't always plan ahead, sometimes I just let things happen the way I think they were meant to happen. It's complicated to explain in a way. You just can't always know what you're going to do if you're unsure I guess. "About all I know is, I sort of miss everybody I told about." Pg. 214 All my old friends from Germany, I miss them like crazy. I haven't seen any of them in over three years. I only keep in contact with one of my many old friends. It makes me sad. Some of them moved in this time and I have no way of contacting them. It makes me sad that I moved away without saying good-bye and then not staying in contact with them. "Don't ever tell anybody anything. If you do, you star missing everybody." Pg. 214 If you tell people something about you or your life or anything else they can use it against you and make your life miserable by having a lot of dirt on you. Not only that but when you bring up something about your past you can end up missing so much about your life and how it used to be you can become very depressed and sad. Missing some one can hurt more than anything else in this world. Sharon Arsenault English Period 3 Journal ...read more.