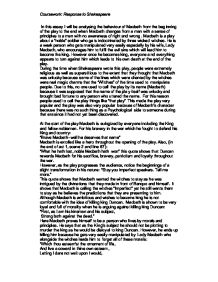 The changes in Macbeth's character

In this essay I will be analysing the behaviour of Macbeth from the beginning of the play to the end when Macbeth changes from a man with a sense of principles to a man with no awareness of right and wrong. Macbeth is a play about a "noble" soldier who gets indoctrinated by three wicked witches. He is a weak person who gets manipulated very easily especially by his wife, Lady Macbeth, who encourages him to fulfil the evil sins which will lead him to become the king. However once he becomes king, everyone and everything appears to turn against him which leads to his own death at the end of the play. During the time when Shakespeare wrote this play, people were extremely religious as well as superstitious to the extent that they thought that Macbeth was unlucky because some of the lines which were chanted by the witches were real magic charms that the "Witches" of the time used to manipulate people. Due to this, no one used to call the play by its name (Macbeth) because it was supposed that the name of the play itself was unlucky and brought bad fortune to any person who uttered the name. For this reason people used to call the play things like "that play" This made the play very popular and the play was also very popular because of Macbeth's character because there was no such thing as a Psychological side to someone during that era since it had not yet been discovered. At the start of the play Macbeth is eulogized by everyone including the King and fellow noblemen. ...read more.

no more" This tells us that Macbeth knows that because he has murdered Duncan he is going to be unable to sleep during the night because of his guilty conscience. He is aware of the fact that he doesn't deserve any sort of peace of mind and may have to live in difficulty. Throughout the rest of the play, Macbeth slaughters Macduff's family and he then kills Banquo. By the time he kills Macduff, Macbeth believes the witches so much that he no longer gives a thought to his guilty conscience: "Then live Macduff, what need I fear of thee? And take a bond of fate: thou shalt not live," This passage shows that Macbeth is no longer caring whether a person that he kills has died for a reason or not- if he thinks that someone could threaten his scheme in becoming the king of Scotland, and then he will eliminate that person regardless of any former relationship with them. Also, before in act 3, scene 4, on line 131 Macbeth confesses: "There's not a one of them but in his house I keep a servant feed." This shows that Macbeth has totally transformed from the start of the play, when he was an honest and loyal person. Now he has turned into a treacherous and malicious dictator, who like Hitler and Stalin makes people live in fear, by keeping paid spies everywhere in order to eliminate any anybody opposing his dictatorship. In the Fifth Act and scene, Macbeth reiterates his acts of tyranny by threatening one of his servants: "Upon the next tree shall thou hang alive Till famine cling thee;" This extract shows that Macbeth is a tyrant by the end of the play. ...read more.

genre is still very popular today, especially in movies, the audience tend to look away at the gruesome scenes and would hate what Macbeth does to his cousin. There were several other scenes of violence in the play (e.g. when Macbeth kills Banquo and the killing of Macduff's family). The audience of the sixteen hundreds would watch these scenes of the play with great delight and if they saw the killing of these innocent people, then they would find it completely normal whereas people form this period of time would find it absolutely abnormal and would most probably react to in disgust and would think that Macbeth is a monster for ordering things of sort to happen. The reason being for this is that during the Shakespearean period, there used to be a large amount of death occurring due to disease which led to high adult and very high infant mortality rates. Furthermore, Macbeth runs on the idea that (as mentioned in the opening act of the play),"fair is foul, foul is fair"- by this Shakespeare is trying to send a message to us that things that appear to be good are bad and vice versa. At the start of the play a character called Macdonwald is mentioned who was said to be a traitor and in the same act Macbeth was also praised about his so called loyalty and honesty. These two characters make a contrast and stick with the idea that good is bad and bad is good- here Macdonwald being good instead of bad and Macbeth being bad instead of good. ?? ?? ?? ?? Coursework: Response to Shakespeare ...read more.