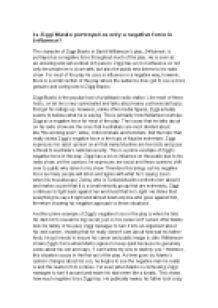 The character of Ziggi Blasko in David Williamsons play, Influence, is portrayed as a negative force throughout much of the play.

﻿Is Ziggi Blasko portrayed as only a negative force in Influence? The character of Ziggi Blasko in David Williamson?s play, Influence, is portrayed as a negative force throughout much of the play. He is seen as an uncaring and self-centred rich person. Ziggi has a lot on influence on not only the people he is close with, but also the public who listens to his radio show. For most of the play he uses in influence in a negative way, however, there is a small section of the play where the audience does get to see a more genuine and caring side to Ziggi Blasko. Ziggi Blasko is the popular host of a talkback radio station. Like most of these hosts, on air he is very opinionated and talks about many controversial topics that get his ratings up. However, unlike other media figures, Ziggi actually seems to believe what he is saying. This is primarily how Williamson portrays Ziggi as a negative force for most of the play. ...read more.

Another prime example of Ziggi?s negative force in the play is when he tells his dad not to reveal his big secret, just so his career isn?t ruined. After Marko tells his family of his past, Ziggi manages to turn it into an argument about his own career, showing that he really doesn?t care about how bad his father feels, he just needs to ensure his career and public image is safe. Williamson shows Ziggi?s force when Marko agrees to keep quiet because he genuinely cares about his son and says, ?I can?t allow my sins to destroy you.? However, this situation occurs in the first act of the play. As time goes on, Marko?s opinion changes about his son, he begins to see the negative man he really is and this leads him to confess. Yet even when Marko is confessing, Ziggi manages to turn it around and make his dad seem like a lunatic. This shows how much negative force Ziggi has. ...read more.

After agreeing to let Marko live with him, Ziggi and Marko speak one on one and Ziggi tells his dad that he meant what he said about him being a great father and that ?I wouldn?t be where I am today without you.? This scene is where the audience sees a side to Ziggi that we don?t see at any other point in the play. He actually cares about his dad?s feelings and wanted to make him feel proud of what he?s accomplished. While it is only a small section of the play, Williamson does show that Ziggi has the potential to no be a negative force all the time. Ziggi Blasko is portrayed as a negative force in David Williamsons Influence. Although there is a slight instance where the audience sees a caring and positive side to him, in the end everyone close to him realises what type of man he is and leaves him. However, he still manages to have a negative force on the public through his radio show. ...read more.