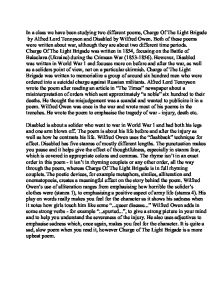 The Charge Of The Light Brigade And Disabled

In a class we have been studying two different poems, Charge Of The Light Brigade by Alfred Lord Tennyson and Disabled by Wilfred Owen. Both of these poems were written about war, although they are about two different time periods. Charge Of The Light Brigade was written in 1854, focusing on the Battle of Balaclava (Ukraine) during the Crimean War (1853-1856). However, Disabled was written in World War 1 and focuses more on before and after the war, as well as a soliders point of view, not on a particular skirmish. Charge of The Light Brigade was written to memorialize a group of around six hundred men who were ordered into a suicidal charge against Russian militants. Alfred Lord Tennyson wrote the poem after reading an article in "The Times" newspaper about a misinterpretation of orders which sent approximately "a noble" six hundred to their deaths. He thought the misjudgement was a scandal and wanted to publicize it in a poem. ...read more.

His play on words really makes you feel for the character as it shows his sadness when it notes how girls touch him like some "...queer disease..." Wilfred Owen adds in some strong verbs - for example "...spurted...", to give a strong picture in your mind and to help you understand the severeness of the injury. He also uses adjectives to emphasise sadness which, once again, makes you feel for the character. It is quite a sad, slow poem when you read it, however Charge of The Light Brigade is a more upbeat poem. Charge Of The Light Brigade is about a suicidal charge, led after a misinterpretation of orders, sending six hundred men to their deaths, where only one hundred and ninety five men survived. Alfred Lord Tennyson after reading an almost hidden article in "The Times" newspaper, felt outraged and didn't want the "noble men fading, therefore publicising the "Charge Of The Light Brigade" in a poem. ...read more.

In my opinion Disabled is the more realistic in its portrayal of war because it explains about the casualties of basically all wars, not just one particular war. Alternatively, I think charge of the light brigade is written in a more interesting way because of the repetition which keeps a strong beat throughout: "half a league, half a league, half a league onward". On the other hand, I think Disabled is easiest to understand because of the way it is written and the simple, but effective language Owen uses throughout his poem, for example: "That's why; and maybe, too, to please his Meg." As you can see, there are no powerful verbs or adjectives, just plain, everyday words, yet words that are so effective in that one particular sentence and the punctuation helps create the effect. Overall, I prefer Disabled because of the strong image I picture in my head, when Owen uses verbs and powerful adjectives such as "spurted" and "queer". I also like the fact that he uses rhetorical questions because it creates drama and suspense when you read the poem. ...read more.