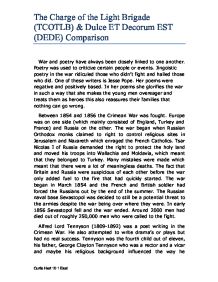 War and poetry have always been closely linked to one another. Poetry was used to criticize certain people or events. Jingoistic poetry in the war ridiculed those who didn't fight and hailed those who did. One of these writers is Jesse Pope. Her poems were negative and positively based. In her poems she glorifies the war in such a way that she makes the young men overeager and treats them as heroes this also reassures their families that nothing can go wrong. Between 1854 and 1856 the Crimean War was fought. Europe was on one side (which mainly consisted of England, Turkey and France) and Russia on the other. The war began when Russian Orthodox monks claimed to right to control religious sites in Jerusalem and Nazareth which enraged the French Catholics. Tsar Nicolas I of Russia demanded the right to protect the holy land and moved his troops into Wallachia and Moldavia, which meant that they belonged to Turkey. Many mistakes were made which meant that there were a lot of meaningless deaths. The fact that Britain and Russia were suspicious of each other before the war only added fuel to the fire that had quickly started. The war began in March 1854 and the French and British soldier had forced the Russians out by the end of the summer. The Russian naval base Sevastopol was decided to still be a potential threat to the armies despite the war being over where they were. In early 1856 Sevastopol fell and the war ended. ...read more.

and "...mouth of hell...", 'hell' brings across the religious upbringing, and it also gives the poem an atmosphere of pride. Another technique he uses is personification to show that the soldiers are actually running into the 'jaws' of death and 'mouth' of hell. "Honour the charge they made...", he uses the word 'honour' as a way to directly instruct you to honour these brave soldiers. Wilfred Owens poem, Dulce ET Decorum EST (DEDE) has 3 stanzas of the same length except the final stanza where there are four extra lines to conclude the poem. DEDE uses alternate rhyming couplets. The poem make use of iambic pentameter and iambic rhythm which makes is sound more natural by mimicking the naturally stressed and unstressed syllables in human speech to make the poem seem more real and engage the readier in the battle. Tennyson's TCOTLB uses a stanza structure where the longest stanzas are in the centre of the poem because this is where the battle takes place, so he uses a lot of descriptive phrases. The last stanza is the shortest, he is almost directly addressing the readers but he does not use second person pronoun which is generally used to directly address and instruct people. Tennyson does not follow typical rhyme schemes as he was tone-deaf and couldn't follow them. The rhythm of TCOTLB is dactylic which makes the stressed and unstressed syllables mimics the sound of the horses galloping into battle as well as the battle itself which engages the reader and makes them feel like they are a part of the battle. ...read more.

He does this by asking rhetorical questions to be answered by the reader, which will make the reader feel more involved in the poem. He also uses imperative verbs to instruct the reader like 'Honour the charge they made!' He restrainedly forces respect and honour for these soldiers, which would make the In the same way to The Charge of The Light Brigade, Owen is directly addressing the audience although in his poem he uses second person pronoun to blame the audience for the deaths of these soldiers and for listening to the jingoistic poetry. Owen portrays the true horror of war which therefore directly attacks the jingoistic poets of the era. In the final four lines of the poem he concludes his poem. He sums up by explaining what propaganda does to people and the effect it has on war. On the last two lines he uses a Para rhyme "Dulce et Decorum est, pro Patria mori" which confronts the jingoistic toast of the time, it also slows the poem down to finish. In conclusion, Owens poem is there to address jingoistic poetry of the time and put across the idea that war is not all glory and heroism whereas Tennyson is trying to honour the troops for obeying orders and fighting for queen and country. Charge of the light brigade is a poem for entertainment purposes which is exactly what Wilfred Owen is trying to criticize and change. ?? ?? ?? ?? The Charge of the Light Brigade (TCOTLB) & Dulce ET Decorum EST (DEDE) Comparison Curtis Hart 10 1 East ...read more.