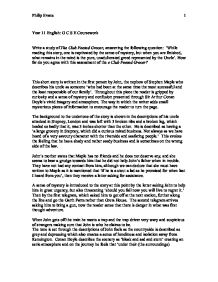 Year 11 English: G C S E Coursework Write a study of The Club Footed Grocer, answering the following question: 'While reading this story, one is captivated by the sense of mystery, but when you are finished, what remains in the mind is the pure, unadulterated greed represented by the Uncle'. How far do you agree with this assessment of the e Club Footed Grocer? This short story is written in the first person by John, the nephew of Stephen Maple who describes his uncle as someone 'who had been at the same time the most successful and the least respectable of our family'. Throughout this piece the reader is gripped by curiosity and a sense of mystery and confusion presented through Sir Arthur Conan Doyle's vivid imagery and atmosphere. The way in which the writer adds small mysterious pieces of information to encourage the reader to turn the page. The background to the undertone of the story is shown in the descriptions of his uncle attacked in Stepney, London and was left with 3 broken ribs and a broken leg, which healed so badly that it, was 3 inches shorter than the other. He is described as having a 'a large grocery in Stepney, which did a curious mixed business. ...read more.

When John is told to walk from the farm at nightfall this gives the reader a further sense of mystery and makes the reader wonder the reasons why these instructions have to be followed. After thanking the farmer, he retorts 'I ask for no thanks from Mr. Stephen Maple or any of his friends' this is where Conan Doyle re-introduces the fact that no one likes John's uncle. Conan Doyle presents a feel of looming danger because although the guide at first is walking swiftly and carelessly he gradually slows to take more care to try to be unnoticeable. The writer describes the dark and isolation that John feels 'This vague inexplicable sense of danger in the midst of loneliness of that vast moor was more daunting than any evident peril could be.' As William drags John into the gorse bushes the reader feels the first sense of real danger. Here we are introduced through the clever imagery of the face, 'illuminated by the glowing bowl of a pipe', which is the first glimpse of one of the menacing character who becomes a key member of the story. When John asks if William the guide knew the person he replied that he wasn't allowed to meet anyone on the way, as he wouldn't get paid. ...read more.

He tells them that what they want is upstairs and through John's description the reader can imagine the scene above at the sailors are looking. John decides to run for help even though he is still tied, when he reaches the door he hears 'a yell and then a shattering splintering noise and then amid a chorus of shouts a huge weight fell with a horrible thud'. Conan Doyle's makes the reader hear for themselves the death of Maple in the words 'Never while I live will that squelching thud pass out of my ears' and summons up vivid image of Maple lying sprawled on the ground 'his bald head twisted onto one shoulder, like the wrung neck of a chicken'. As the sailors are deciding on John's fate it becomes apparent that Maple's wooden foot had shattered scattering precious stones on the ground. This is when John escapes. This is the only time in the story that the reader understands Maple's sad greed, because he has kept for all these years these precious stones but not utilized their value. Yet this is not 'pure unadulterated greed' as he did not use them to live a life of riches and acquiring material possessions. Instead he lived in a 'sordid fashion' for years content with just the knowledge that he had these stones with him at all times. ?? ?? ?? ?? 1 Philip Evans ...read more.