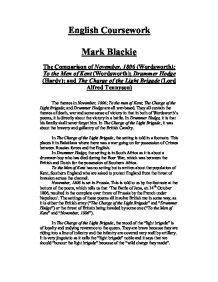 The Comparison of November, 1806 (Wordsworth); To the Men of Kent (Wordsworth); Drummer Hodge (Hardy); and The Charge of the Light Brigade (Lord Alfred Tennyson)

In November, 1806, the mood is that the narrator is nervous about the fact that Napoleon has been able to defeat Prussia and he might now come and try to invade England. The moods are therefore very different for each poem, each one having a different mood entirely. There is quite a lot of imagery in the four poems. in The Charge of the Light Brigade, there is a constant reference to biblical imagery. In lines three, seven, and sixteen there is the repeated image of the valley of death from psalm twenty-three ("Lo should I walk through the valley of death, I will fear no ill"). This also refers back to the fact that the "light brigade" trust their superiors to not get them killed, and therefore they do fear no ill. This brings in the imagery of the cavalry seeing the officers as their metaphorical "shepherds", i.e. "the lord is my shepherd". Lines twelve to fifteen ("Their's not - and die"), tell us that the soldiers were, at the time of the order, seen to be a lower-class to the rest of the army, as they are being sent in first, to almost certain death. ...read more.

This could mean that the French would be scared of the men of Kent because they know what they are like. In line three, it says, 'haughty brow'. This personifies Britain and gives Kent a bit more strength in words, as it is not just any brow; it is a 'haughty brow' meaning that it is tough. In line twelve, the word "parleying" could be referring to the possible threat of invasion from the French. In line twelve also, the words "Britain is in one breath" could mean that the "Men of Kent" only have one chance to defend Britain against the French. This makes the poem more jingoistic as the British are now putting all their faith in the "men of Kent". In November, 1806, in line seven, it says 'by our own right hands it must be wrought' meaning that to do something right, you have to do it yourself. This could also be referring to the fact that Victorian society and, in fact, society up until the seventies, believed it better to be right handed and left-handed children were encouraged to write with their right hands. ...read more.