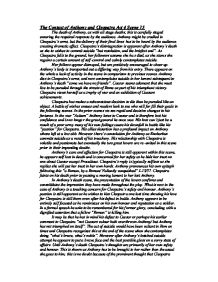 The Context of Anthony and Cleopatra Act 4 Scene 15

The Context of Anthony and Cleopatra Act 4 Scene 15 The death of Anthony, as with all stage deaths, this is carefully staged ensuring the required response by the audience. Anthony might be cradled in Cleopatra's arms, but the delivery of their final lines has to be heard by the audience creating dramatic effect. Cleopatra's disintegration is apparent after Anthony's death as she to wishes to commit suicide "but resolution, and the briefest end". As Cleopatra falls to the ground, her followers assume she has died, as she stares she regains a certain amount of self-control and calmly contemplates suicide. Her follows appear dismayed, but are positively encouraged to cheer up. Anthony's body is transported out a differing way from his entry. There appears on the whole a lack of activity in the scene in comparison to previous scenes. Anthony dies in Cleopatra's arms, and now contemplates suicide in her lament subsequent to Anthony's death "come we have no friends". Caesar seems adamant that she must live to be paraded through the streets of Rome as part of his triumphant victory. Cleopatra views herself as a trophy of war and an exhibition of Caesars achievements. Cleopatra has makes a subconscious decision to die than be paraded like an object. A battle of wishes ensues and readers look to see who will for fill their goals in the following scenes. ...read more.

The act of suicide would have been valiant in Rom an times and Cleopatra recognises this at the end of the scene when she contemplates doing "what's brave, what's noble". However after Anthony's botched suicide attempt he appears to put a brave face and the best possible gloss on a sorry state of affairs. Until Anthony's death Cleopatra's thoughts are primarily of her own safety and honour. This is shown as Anthony has to be brought to her rather than the usual she goes to him; this is no doubt because of the prominent thought that Cleopatra believes she will become an ornament "be brooched". Far from being absorbed in each other to the exclusion of al else, therefore the lovers exhibit the intense self-regard that they have shown from the beginning. Anthony's sense of himself as a valiant, indeed triumphant, Roman is matched by the regal imperiousness of Cleopatra, reflected in many of the images used by her and those about her. She is sovereign "Royal Egypt" and empress; she talks of a crown, her spectre and a jewel. She associates herself with divinity when she wishes she had Junos power to set Anthony by Jove. Her grand extravagance is reflected in characteristic hyperboles: she would rail so strongly that Fortune might break her wheel, she would find it becoming to throw her sceptre against the gods that permit this harm and hurt. ...read more.

The language of the play is very much stylistic which can be viewed upon reading a varied variety of Shakespeare texts. The style and layout of the play is quite contrary to other plays as the scenes are quite short which is a critism by many readers of Shakespeare works i.e. critics. In act 4 Scene 15 there is varied use of Hyperboles used to create dramatic effect and a sense of urgency for readers these hyperboles are apparent throughout their speeches in this scene. The language that Shakespeare uses is quite counter to plays that were out at the time there are many short scenes and vivid images are used to create effect for the readers. Humour is used in order to emphasis points that are important as well as add a comical and humorous aspect to the pathos surrounding Anthony's death. The atmosphere in the last stages of their lives is filled with Pathos, Grandeur and sombre and solemn laments to each other. The once happy mood that surrounded the couple has now been removed as the shadow of death appears to hover over them and the imminent end seems near. Shakespeare uses this to great effect as the text picks up pace and loses pace at the end prior to their demise. The pathos of the play is included at the final close were Cleopatra implements her plan and kills herself to remain with her beloved Anthony. This can be seen by the audiences as the ultimate sacrefice. ...read more.