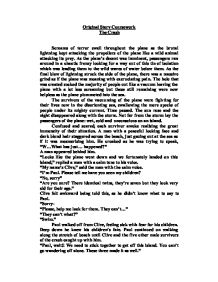 Original Story Coursework The Crash Screams of terror swell throughout the plane as the brutal lightning kept attacking the propellers of the plane like a wild animal attacking its prey. As the plane's decent was imminent, passengers ran around in a chaotic frenzy looking for a way out of this tin of isolation which was leading them to the wild waves of water below them. As the final blow of lightning struck the side of the plane, there was a massive grind as if the plane was moaning with excruciating pain. The hole that was created sucked the majority of people out like a vacuum leaving the plane with a lot less screaming but those still remaining were now helpless as the plane plummeted into the sea. The survivors of the vacuuming of the plane were fighting for their lives now in the disorienting sea, swallowing the mere specks of people under its mighty current. Time passed. The sun rose and the night disappeared along with the storm. Not far from the storm lay the passengers of the plane: wet, cold and unconscious on an island. Confused and scared, each survivor awoke realising the great immensity of their situation. A man with a peaceful looking face and dark blond hair staggered across the beach, just gazing out at the sea as if it was mesmerising him. He croaked as he was trying to speak, "W...What has just... ...read more.

Clive walked over to the sea. "Are we swimming over there then?" An answer was not necessary so Paul, Mark, Ed and Dave followed in after Clive. Paul was ever so determined to make it there as fast as he could so he forced his arms and legs to swim as fast as they could possibly go. Once they made it over to the floating wreckage, they hung onto the broken wing of the plane to regain their breath as they were now a long way at sea. "How is this thing still floating?" Mark said, gasping for air. Paul quickly analysed the plane and noticed it was slanted in an angle with the cockpit sticking out in the air and the right wing balancing the whole plane on a rock. "There must be air trapped inside. That's why it's floating," shouted Paul. "So how do we get inside then, bright spark?" Ed quickly said with wit. "Well if you'd look there's a rip in the plane's metal just above the wing so we'll climb on to the rock then into the-" replied Paul. "Yeah we get!" Clive was the first to climb up onto the plane as he now had the distinct impression he was the leader. The others followed with Paul entering second. When he peered into the hole he saw a dark damp pit of seats and a Holocaust pile of bodies drowned at the bottom of the plane in the stream of blood and water that had leaked in. ...read more.

The water turned into a red mist from the blood until he pulled himself out through the hole and saw two faces in a panic looking at him. "Where's Ed?" Paul's eyes were blurred at first and then he realised it was Clive talking to him. "Where's Ed?" "He... I couldn't save him," murmured Paul. Clive and Dave sympathetically just shook their heads, knowing Paul wouldn't want to talk about it. Clive and Dave slowly swam Paul back to shore while trying to keep his hands out of the water to avoid the stinging pain he would get from the salt water. Back on the sandy beach the three survivors lay motionless from exhaustion. Paul stared deeply at the tranquil blue sky until his eyelids shut and he was asleep "Paul, Paul, wake up Paul!" Paul slowly opened his eyes to see Clive and Dave looking extremely pleased with themselves. "Guess what?" whispered Dave. "What?" "Me and Clive got the radio working and we managed to contact a shrimping boat near-by." "That's great news," replied Paul who was now on his feet. "They said they could be here roughly in about three hours." "How can they find us?" asked Paul. "They mentioned something about homing in on our radio signal," answered Clive. Paul walked off from Clive and Dave. He strolled along the beach staring out at the bright orange sunset sky. He thought about the crash of the plane, Mark, Ed and especially about his children whom he would miss dearly. Paul continued on walking until the boat came to collect them. ...read more.