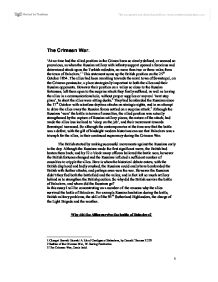 The Crimean War. 'At no time had the allied position in the Crimea been so clearly defined, or seemed so precarious, as when the Russian artillery with infantry support opened a ferocious and determined attack upon the Turkish redoubts, no more than two or three miles from the town of Balaclava.'1 This statement sums up the British position on the 25th October 1854. The allies had been marching towards the naval town of Sevastopol, on the Crimean peninsular, a place strategically important to both the allies and their Russian opponents. However their position on a valley so close to the Russian fortresses, left them open to the surprise attack they finally suffered, as well as leaving the allies in a communications hole, without proper supplies or any real 'next step plans'. In short the allies were sitting ducks.2 They had bombarded the Russians since the 17th October with relentless daytime attacks on strategic sights, and in an attempt to drive the allies away the Russian forces settled on a surprise attack.3 Although the Russians 'won' the battle in terms of casualties, the allied position was actually strengthened by the capture of Russian artillery pieces, the nature of the attack, had made the allies less inclined to 'sleep on the job', and their movement towards Sevestapol increased. So although the contemporaries at the time saw that the battle was a defeat, with the gift of hindsight modern historians can see that Balaclava was a triumph for the allies, in their continued supremacy during the Crimean War. The British started by making successful movements against the Russians early in the day. Although the Russians made the first significant move, the British had beaten them back, and by 12 o'clock many officers believed the battle won, however the British fortunes changed and the Russians inflicted a sufficient number of casualties to cripple the allies. Here is when the historical debate enters, with the British displaced and badly crushed, the Russians could easily have bombarded the British with further attacks, and perhaps even won the war. ...read more.

It is also interesting to note that after the Napoleonic wars, 300000 thousand soldiers were demobilised and sent back to their parishes, however after the Crimean war, Palmerston kept his peace-time army, at over 215000.26 The British army The 'Charge of the Light Brigade' was indicative of the legendary discipline of the British Army but also the lack of tactical grasp which beset the joint Anglo-French campaign.27 The twenty years of Anglo-French war was still in the minds of the British army, and their unlikely partnership with the French, rubbed against the grain, of officers who had been trained with Napoleonic hostility still in mind. The same battle orders and general plans had been used since the Napoleonic wars. A division of infantrymen usually held up to 5280 men and two batteries of artillery, and a cavalry division usually held 2800 men, and one troop of horse artillery. This was known as a winning combination. On the battle field at Balaclava there were two cavalry divisions the Light-Brigade and The Heavy Brigade, who were fatally jealous of each other, and refused to let one take preference over the other in battle.28 The Heavy Brigade's successes earlier in the day may have led to a jealous show of strength which led to the tragic 'Charge of the Light Brigade'. Much more successful than the Cavalry however, was the infantry divisions, later to become known as 'the thin red line' after their heroic stance against the Russian cavalry.29 Although not containing a large amount of men, each Division spread itself the length of the Russian Cavalry attack, and shot deep into the wave horses, both startling the horses, and dismounting their riders. Unlike the Russian Redoubts, during the British cavalry charges, the British troops were trained to stand still when faced with a cavalry charge, and instead of being cut down like the Russians they managed to repel the Russian cavalry. ...read more.