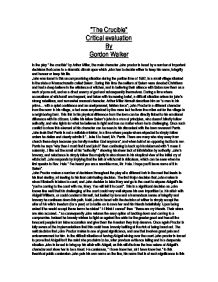 "The Crucible" Critical evaluation By Gordon Walker In the play " the crucible" by Arthur Millar, the main character John proctor is faced by a number of important decisions that come to a dramatic climax upon which John has to decide wither to keep his name, integrity and honour or keep his life. John was found in this uncompromising situation during the puritan time of 1692, in a small village situated in the state of Massachusetts called Salem. During this time the settlers of Salem were devoted Christians and had a deep believe in the existence of witches, and in believing their alliance with Satan saw them as a work of pure evil, and as a direct enemy of god and subsequently themselves. During a time where accusations of witchcraft are frequent, and taken with increasing belief, a difficult situation arises for john's strong rebellious, and somewhat unusual character. Arthur Millar himself describes him as "a man in his prime.... with a quiet confidence and an unexpressed, hidden force"; John Proctor is a different character from the norm in his village, a fact even emphasized by the mere fact he lives five miles out for the village in a neighboring farm. This link in his physical difference from the town can be directly linked to his emotional difference with its citizens. ...read more.

or to battle on to save her and his friends indefinitely. Upon being asked if he would accept these terms he stated " I-I think I cannot" then "these are my friends. Their wives are also accused..." so consequently John refuses the easy option of backing down and coming to a compromise. Instead he bravely wishes to fight on against the odds for the greater good and free all the innocent people from false accusation and give them the freedom they truly deserve. Once again Proctor is fully aware of the implementations that this could have bravely battling at the risk of being found out. The next decision that John Proctor makes is one of great significance, and one that involves great pain and embarrassment for him. In the difficult situation of having Abigail wining over the court John proctor is forced to prove that Abigail isn't the saint she proclaims to be, after previous evidence failing and in a desperate situation John is forced to bring up his affair with Abigail, as this will disclose the true nature of Abigail's character and show her to be a fraud. He confesses, " I have know her, sir I have know her." in this theatrical public confession John puts his own name on the line, his name that is of such significance to this man of his principles. ...read more.

Because I cannot have another in my life! Because I lie and sign myself to lies! Because I am not worth the dust on the feet of those who hang! How may I live without my name?" Now proctor has made his final decision and come to the end of his path, his various decisions throughout the play all culminate to his death. Proctors principles and honour have won at the sacrifice of his life, but the true pure Christian light of his soul has shone through in the end and John Proctor has died a content and honorable man. The title is significant due to the similarities of an actual crucible to the heated situation of Salem. In this "crucible" that John found himself in all the impurities of the town of Salem, and all those deep inside him have all been incinerated, and the truly good and pure people (including john) have emerged. John has emerged pure, good and enlightened. John's final decision (not understood by most) is wonderfully summed up by his wife's brave realization "He has his goodness now. God forbid I take it from him!" Proctor no longer is tormented by the impurities of his soul or of lies, he is free now, he is at ease, and he is with God. He died a true Christian man, the way he always wanted. ...read more.