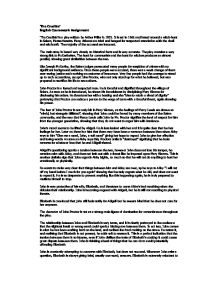 'The Crucible' is a play written by Arthur Miller in 1953.

'The Crucible' English Coursework Assignment 'The Crucible' is a play written by Arthur Miller in 1953. It is set in 1962 and based around a witch-hunt in Salem, Massachusetts. Many citizens are tried and hanged for suspected association with the devil and witchcraft. The majority of the accused are innocent. The main story is based very closely on historical facts and is very accurate. The play contains a very strong link to McCarthyism. The hunt for communists and the hunt for witches produces an almost parallel, showing great similarities between the two. Like Joseph McCarthy, the Salem judges prosecuted many people for suspicion of crimes with no significant background evidence. Once these people were accused, there was a weak change of them ever seeing justice and receiving an outcome of innocence. Very few people had the courage to stand up to such accusations, except John Proctor, who not only stood up for what he believed, but was prepared to sacrifice his life to save others. John Proctor is a feared and respected man. He is forceful and dignified throughout the village of Salem. As soon as he is introduced, he shows his forcefulness by disciplining Mary Warren for disobeying his orders. He threatens her with a beating and she "tries to retain a shred of dignity" portraying that Proctor can reduce a person to the verge of tears with a forceful threat, again showing his power. ...read more.

John is always remarking about Elizabeth, trying to gain some recognition, in the hope that he will inherit some kind of forgiveness. As John eats in silence, the tension between the couple rises. Eventually the silence is broken and John says to Elizabeth "I think you're sad again. Are you?". It is obvious that Elizabeth wants to avoid the subject, so she changes it. John is always scrambling through his mind for things to say that would not offend Elizabeth. It is blatantly obvious that he does not want to hurt Elizabeth in any way, so the impression is given that he is planning his sentences out in his head. Elizabeth begins talking about John's late coming. A row is avoided but John is still persistent in asking about Elizabeth's sadness. Eager to keep the peace, John goes on to answer Elizabeth's question. The tension is building to its limits and this is obvious to the audience. Now that the topic of sentence has changed, Elizabeth puts more effort into answering John's questions, desperately trying to avoid John's previous curiosity. Finally the dispute begins. The bending ruler that was the "Peace" between John and Elizabeth has snapped. John feels immense remorse for his affair with Abigail, and it is a very delicate area for John to deal with, so, as soon as Elizabeth begins asking about it, John has had enough, and begins to add his side to the row. ...read more.

signifying that John does not want to give his name away, and if they already have his verbal confession, what do they need his name for? John is becoming very desperate and this is portrayed through his voice and his actions. The audience will receive a very strong feeling of this as well. There is also a build in the atmospheric tension, but building up to what is not clear. He knows now that because of his actions, and his want for retaining his dignity, he has to die. John is in a state, but realises that this is the best thing for him. The amount of courage is immense and this is displayed in the same immense amount. John is doing a very noble thing. Because he dies, he retains his dignity, keeps his name and prevents the death and sorrow of others, simply by taking his own life. Elizabeth is in a state, she is "Preventing herself from collapse" because she is so distraught. She shouts "He have his goodness now. God forbid I take it from him." This is a very important line because it shows how by doing this one thing, John has become a good person. He has seen the error of his ways and he has realised how he can gain forgiveness; by taking his own life to benefit the lives of others. This is the line that ends the play and it really emphasises the real John Proctor. ?? ?? ?? ?? ...read more.