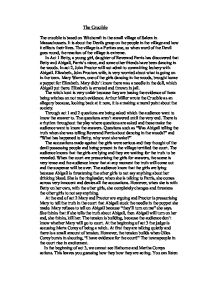 The Crucible The crucible is based on Witchcraft in the small village of Salem in Massachussets. It is about the Devils grasp on the people in the village and how it effects their lives. The village is a Puritan one, so when word of the Devil goes round, the reaction of the village is extreme. In Act 1 Betty, a young girl, daughter of Reverand Parris has discovered that Betty and Abigail, Parris's niece, and some other friends have been dancing in the woods. In act 2, John Proctor will not admit to committing lechery with Abigail. Elizabeth, John Proctors wife, is very worried about what is going on in the town. Mary Warren, one of the girls dancing in the woods, brought home a poppet for Elizabeth. Mary didn't know there was a needle in the doll, which Abigail put there. Elizabeth is arrested and thrown in jail. The witch hunt is very unfair because they are basing the evidence of them being witches on not much evidence. Arthur Miller wrote the Crucible as an allegory because, looking back at it now, it is a making a moral point about the society. Through act 1 and 2 questions are being asked which the audience want to know the answer to. The questions aren't answered until the very end. There is a rhythm throughout the play where questions are asked and these make the audience want to know the answers. Questions such as "Was Abigail telling the truth when she was telling Reverand Parris about dancing in the woods?" ...read more.

The third attempt at giving the truth is when Hathorne asks Giles who gave him the information. Hathorne wants a name but Giles refuses to give one. This would be frustrating for Proctor because he knows he should tell the truth but never really gets the right moment. Most of the time Proctor does speak reasonably but he is prone to having angry outbursts. I think he has these outbursts due to frustration. Near the end of act 2 on page 83, the court are discussing the poppet. Proctor is speaking quite calmly until Parris says, "Why could there not have been poppets hid where no one ever saw them?" Proctor is furious at this. He thinks that Parris is trying to be awkward. Proctor is in danger of losing his credibility if he carries on having these angry outbursts. This adds tension because you don't know whether Proctor might let slip the truth at any second. On page 80 Hale says, "I have signed seventy two death warrents; I am a minister of the Lord, and I dare not take a life without there be a proof so immaculate no slighted qualm of conscience may doubt it." He is trying to say that he has never hung an innocent man. When Danforth asks Parris if he did see the girls dancing in the woods, he replies unwillingly, "aye sir." Now Parris admitted that he saw Abigail and the other girls dancing in the woods, Danforth will look at Abigail as a guilty girl, who has lied to the court. ...read more.

This time, Mary screams with them. She has finally surrended. She says, "No, I love God; I go your way no more. I love God, bless God. (Sobbing, she rushes to Abigail) Abby, Abby, Ill never hurt you more!" In this scene the worst possible outcome has happened. This makes the audience feel shocked and, sort of, betrayed. At the end of Act 3 it ends in mayhem and madness. Proctor also cracks, he starts saying mad things. "(Laughs, insanely, then): A fire, a fire is burning! I hear the boot of Lucifer, I see his filthy face...and we will burn, we will burn together." Proctor has had one of his angry outbursts again. He has finally been beaten but is trying one last desperate attempt to clear his name. "You are pulling down Heaven and raising up a w***e." He says this because he is saying he is good and he belongs in heaven, whereas Abigail, the w***e, is being encouraged and she is going up in the world. John, who belongs in Heaven, is being pulled down for doing the right thing. At the beginning of act 4, the scene is set early on in the morning and the atmosphere is very quiet and calm. The room is dark, quiet and gloomy. This is an example of pathetic fallacy. It is reflecting the mood of the characters. It is a contrast to the end of the last scene because it is completely different. At the beginning of act 4 the audience is in suspense and are very tense because you want to know what has happened to John Proctor after he was arrested. ...read more.