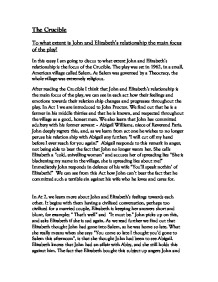 The Crucible: To what extent is John and Elizabeth's relationship the main focus of the play?

The Crucible To what extent is John and Elizabeth's relationship the main focus of the play? In this essay I am going to discus to what extent John and Elizabeth's relationship is the focus of the Crucible. The play was set in 1962, in a small, American village called Salem. As Salem was governed by a Theocracy, the whole village was extremely religious. After reading the Crucible I think that John and Elizabeth's relationship is the main focus of the play, we can see in each act how their feelings and emotions towards their relation ship changes and progresses throughout the play. In Act 1 we are introduced to John Proctor. We find out that he is a farmer in his middle thirties and that he is known, and respected throughout the village as a good, honest man. We also learn that John has committed adultery with his former servant - Abigail Williams, niece of Reverend Paris. John deeply regrets this, and, as we learn from act one he wishes to no longer peruse his relation ship with Abigail any further; "I will cut off my hand before I ever reach for you again!" Abigail responds to this remark in anger, not being able to bear the fact that John no longer wants her. She calls Elizabeth a "cold, snivelling woman" and accuses her of spreading lies "She is blackening my name in the village, she is spreading lies about me!" ...read more.

It gets to the point where John is so determined to prove Abigail is a fraud; he admits to have "Known" her. He tells the court that this is the reason his good wife threw Abby out, because she knew her as a harlot. He tells the court that his wife is a good woman and would never lie "In her life, sir, she have never lied" However, when the court asks Elizabeth to join, Danforth asks her "To your own knowledge has John Proctor ever committed the crime of lechery!" At this one point in her life, ElIbeth tells a lie "No sir" she answers. She tells this lie to defend and protect John it shows that she loves him and that maybe she loves him more than God. John tells the court that Elizabeth only thought to save his name, and Hale agrees with him that it is a natural lie to tell. Elizabeth is not sentenced for lying to the court, but John is taken to jail. In Act 4 Elizabeth finds out that John is going to be hanged, the only way he can save his life is if he signs a confession to witchcraft. Elizabeth goes to John to see whether or not he will sign this confession. At first John confesses to Danforth but refuses to sign the confession in fear of blackening his name, in the end John says "I lie and sign myself to lies!" ...read more.

This is how McCarthyism is linked to the play - there is a resemblance between the way that the committee would ask for other communist names, and the way that during the Salem trials any one found to be a witch would be asked to name any other witches they knew of. My conclusion is that I definitely think John and Elizabeth's relation ship was the main focus of the play, we can see how their relation ship changes from Act 2 when they are arguing with each other, to Act 3 when Elizabeth tells the only lie she has ever told in her life to defend John in court, to Act 4 when eventually they forgive each other. We see how first of all Elizabeth holds the fact that John committed adultery against him, and then, throughout the play, she manages to see the good in him and defends him, and eventually forgives him. We see how John is ashamed to admit his sin but then he admits it, and is man enough to take the punishment and die an honest man. I think Abigail's role is equally as important as John's and Elizabeth's as she is the villain of the play and I think that Arthur Miller has linked his play to McCarthyism to show that even though two hundred years have passed, not very much in the political side of things, has changed. ...read more.