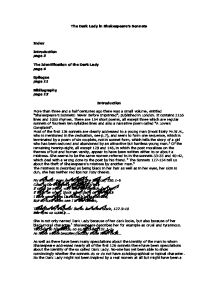 The Dark Lady in Shakespeare�s Sonnets Index Introduction page 3 The Identification of the Dark Lady page 4 Epilogue page 11 Bibliography page 13 Introduction More than three and a half centuries ago there was a small volume, entitled "Shakespeare�s Sonnets: Never Before Imprinted", published in London. It contains 2155 lines and 1055 rhymes. There are 154 short poems, all except three which are regular sonnets of fourteen ten syllables lines and also a narrative poem called "A Lovers Complaint". Most of the first 126 sonnets are clearly addressed to a young man (most likely Mr.W.H., who is mentioned in the dedication, see p.7), and seem to form one sequence, which is terminated by a poem of six couplets, not in sonnet form, which tells the story of a girl who has been seduced and abandoned by an attractive but hartless young man.1 Of the remaining twenty-eight, all except 129 and 146, in which the poet moralises on the themes of lust and human vanity, appear to have been written either to or about a mistress. She seems to be the same women referred to in the sonnets 33-35 and 40-42, which deal with a wrong done to the poet by his friend.2 The Sonnets 127-154 tell us about the theft of Shakespeare�s mistress by another man.3 The mistress is described as being black in her hair as well as in her eyes, her skin is dun, she has neither red lips nor rosy cheeks. ...read more.

Yet so they mourne, becoming of their woe, That every tongue says beauty should look so. Attempts at identification this mistress have included the name of Mrs. Jane Devenant, the wife of an Oxford vintner, who with her husband John kept a tavern at Oxford, where Shakespeare is supposed to have put up on his frequent trips between London and Stratford.19 Yet, the Sonnets tell us about a women who plays upon the virginals with professional skill. This makes us think of her as of a more wealthy and leisured or professional women. How often when thou my music play�st, 128.1-2 Upon that bless�d wood whose motion sounds During the time the Dark Lady Sonnets were probably written, Shakespeare had no entree into wealthy homes in London, but he was connected with the theatre, and so might she have been.20 There was a certain William Kempe member of the theatrical troupe and a famous instrumentalist who enjoyed the patronage of the Earl of Leicester. It has been suggested that William Kempe was married and that his wife was herself an accomplished musician and had access to an instrument. Maybe she did not accompany her husband on his continental tour (Leicester took the players as part of his entourage as commander of the English forces fighting with the Netherlanders in their war of independence), and that she had a liaison with Shakespeare during that time.21 William Kempe became a partner of Shakespeare in the Lord Chamberlain�s Company eight years later, and the two men were apparently friends. ...read more.

identity are thus profitless."30 Other critics, like Anthony Burgess, believe it better to keep the lady anonymous for her own sake: "It was an affair of lust not love, and the women is best thought to be kept anonymous, an instrument of elemental pleasure, then remorse."31 "It is best to keep the Dark Lady anonymous, even composite. ...The Sonnets make statements of permanent validity about some of the commonest experiences known to a man - obsession with a woman�s body, revulsion, pain in desertion, resignation at another�s treachery."32 To me Burgess� suggestion that Shakespeare did not restrict himself to one love-affair, but that he had several liaisons and mistresses during his time in London, seems most likely. "Shakespeare was a long time in London, and we cannot think that he limited himself to one affair."33 "What I mean is that it is tempting to associate Shakespeare�s pessimism and obsession with sexual excess and disease with one particular object - the Dark Lady - but, if we accept the powerful libido of Will, it is probable that his fault was not a single fixations but promiscuity. He loved not wisely but too frequently."34 So every attempt at identification may contain a little part of the truth. The Dark Lady might be a composition of different women as well as off different love stories and Shakespeare may also have added some of his criticism about the fair ideal of beauty and some parodies of other poet�s palliated poems. ...read more.