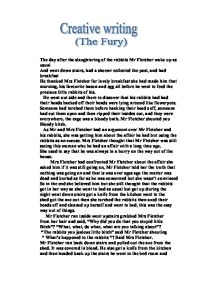 The day after the slaughtering of the rabbits Mr Fletcher woke up as usual And went down stairs, had a shower collected the post, and had breakfast He thanked Mrs Fletcher for lovely breakfast she had made him that morning, his favourite bacon and egg all before he went to feed the precious little rabbits of his. He went out side and there to discover that his rabbits had had their heads hacked off their heads were lying around like flowerpots. Someone had torched them before hacking their heads off, someone had cut them open and then ripped their insides out, and they were everywhere, the cage was a b****y bath. ...read more.

truth that nothing was going on and that is was over ages ago the matter was dead and buried as far as he was concerned but she wasn't convinced So in the end she believed him but she still thought that the rabbits got in her way so she went to bed as usual but got up during the night went down stairs got a knife from the kitchen went to the shed got the axe out then she torched the rabbits then axed their heads off and cleaned up herself and went to bed, this was the easy way out of things. Mr Fletcher ran inside went upstairs grabbed Mrs Fletcher from her hair and said, "Why did you do that you stupid little b***h"? ...read more.

he got from the kitchen he ripped out her insides and stabbed her in her eyes and then ripped out her heart one last "Thud" and that was the end of Mrs Fletcher. Then Mr Fletcher stopped and looked around at the mess he had made and the murder he had committed, he dropped Mrs Fletchers Heart to the ground the blood on his hand was still warm he could feel the heat of it he then picked up the knife and shouted "whether it's heaven or h**l here I come" and then finally stabbed him self in the heart, and as he fell to the ground he saw Mrs Fletchers head right in front of him and he landed on it his face on top of hers. ...read more.