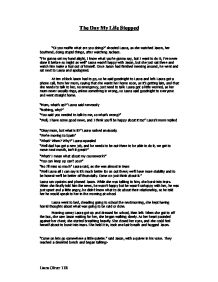 The Day My Life Stopped

The Day My Life Stopped "Oi you muffin what are you doing?" shouted Laura, as she watched Jason, her boyfriend, doing stupid things, after watching Jackass. "I'm gunna set my hand alight, I know what you're gunna say, but I want to do it, I've never done it before so might as well" Laura wasn't happy with Jason, but she just sat there and watch him make a fool out of himself. Once Jason had finished messing around, he went and sat next to Laura and apologised. At ten o'clock Jason had to go, so he said goodnight to Laura and left. Laura got a phone call, from her mum, saying that she wants her home soon, as it's getting late, and that she needs to talk to her, no emergency, just need to talk. Laura got a little worried, as her mum never usually rings, unless something is wrong, so Laura said goodnight to everyone and went straight home. "Mum, what's up?" Laura said nervously "Nothing, why?" "You said you needed to talk to me, so what's wrong?" "Well, I have some good news, and I think you'll be happy about it too" Laura's mum replied "Okay mum, but what is it?" Laura rushed anxiously. "We're moving to Spain" "What? When? Why?" Laura squealed "Well dad has got a new job, and he needs to be out there to be able to do it, we get to move next month, isn't it great?" ...read more.

Laura said disappointedly. "No, you know what Laura I should be sorry, it's your last week, and we're mates, and it isn't fair on you, I'll definitely make time, and if you want I'll come every night. Sorry I shouldn't have sounded so horrible." Said Jason sympathetically. "I don't mind, but if you've got Natalie to worry about then don't bother, I know it sounds harsh, but you have other priorities you need to stick by them, don't you!" Laura said abruptly. She felt kind of a little mean in the way she said it, but she felt that as he has hurt her, she should hurt him. She wasn't proud of what she had done, but she felt as if it had to be done. "No, Laura it isn't a problem, we're friends and it isn't fair for you to have to go without us two saying goodbye. I mean are you even coming back?" Jason replied "Are you sure? I mean it isn't really fair on Natalie is it?" Laura said cautiously "I don't think we'll be together for much longer anyway, I mean have you seen how flirtatious she is? And to be honest I think I like someone else, I know I shouldn't say that to you, one; because you're mates, and 2; because well, it's you. ...read more.

Laura was gob smacked, she didn't know what to say, and as she was leaving the next day, she knew even though she felt the same, nothing could happen. She finally got up the courage to say how she felt too; "Well, you know I feel the same, but I'm sorry I can't do anything about it. I'm sorry if it sounds harsh but that's just how it has to be." Then she put the phone down. She felt awful for what she had said, but that's how it had to be. Moving day for Laura came; the removals were in and out of the house all day. She was saying her goodbyes, tears streaming down her face, then got into the car. As she was pulling out of her drive, she saw Jason standing at the end of her road. She got out and they started talking, saying their goodbyes, and gave each other one last kiss. She got in the car, and left her life behind. For Laura, that was the day her life stopped, she left everything she ever knew, and loved. She didn't know when the next time she would see her friends again. She didn't know if she ever would. She was in love and she had to leave Jason behind. She literally died inside. Now, she may live in Spain, but her life, and her happiness is in England. She knows when she goes back, her life will be rescued. Liana Oliver 11R ...read more.