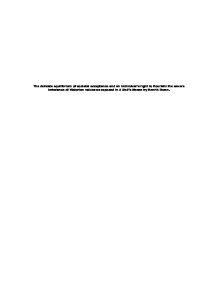 The delicate equilibrium of societal acceptance and an individual's right to flourish: the severe imbalance of Victorian values as exposed in A Doll's House by Henrik Ibsen.

The delicate equilibrium of societal acceptance and an individual's right to flourish: the severe imbalance of Victorian values as exposed in A Doll's House by Henrik Ibsen. Henrik Ibsen has elevated theatre from a source of mere entertainment and turned it into a forum for exposing the many critical problems of Victorian society. Prior to Ibsen, contemporary theatre consisted of more shallow subjects such as historical romances or contrived behavior plays. However, with A Doll's House, Ibsen transformed drama into a reputable genre for the portrayal and examination of social issues. In exposing the many flaws within the Helmer marriage, he made what was wrongly private public and in doing so provided a great advocacy for women, which was a rare feat most especially because Henrik Ibsen was a man himself. A prime example of this would be in Act III, when Nora slams the door as she leaves, she is opening a door into the hidden world of the ideal Victorian marriage. In allowing Nora the right to satisfy her need for an identity separate from that of wife and mother, Ibsen is perceived as endorsing the growing question of a woman's role in society, and the freedom of their rights that is much sought after. ...read more.

Indeed, strong enough to dethrone the bourgeois family as the central institution of society. Nora's courageous rebellion at the end of the play is an integral part of this revolution; it closes the door on a limited and constricted past and opens it to a free, boundless future. The topic of women's rights and gender equality is a significant aspect of A Doll's House. In the illustrated life of Nora, Ibsen illuminates the golden cage that women of the time lived in. Striking a true equality between sexes necessitates fundamental changes in society. Thus, in embracing women's equality in A Doll's House, Ibsen is also in actuality arguing for social justice as well. As mentioned above, in having Nora "slam the door" on her previous life, Ibsen is showing his support the protection of women's property in a marriage and various other issues concerning equality in a marriage. The strong willed heroine that Nora eventually develops into is the embodiment of the feminist female that Ibsen openly accepted and that Victorian society rejected with a vengeance. The fact that Nora is able to leave her husband is a criticism of the helpless Victorian female figure. However, the added show of complacency towards the vengeance shows indifference for societal views, which is a complete and utter rejection of Victorian society as a whole. ...read more.

This symbolic gesture indicates that Ibsen is not content with the fact that Nora has been able to free herself of the shackles placed upon her by society, but rather wishes to portray that additionally, Nora is freeing her daughter from such circumstances in the future, providing hope for revolution, and that change for the good is in process. Ibsen has made it clear that the prevailing view in the Victorian era was that women had little worth when their usefulness as mothers had ended and this is clearly shown in Torvald's repudiation of Nora when he discovers her deception; she can be of no use to her children if her reputation is stained. That he wants her to remain under his roof; though separate from the family; defines his own need to protect his reputation within the community. If Nora wants to define her worth, she can only do so by turning away from her children and husband. In the end, it is Torvald who is the epitome of a Victorian citizen, and it is Nora who embodies all that Ibsen hopes of for the future. It is in their relationship that the struggle between the conventional Victorian and the promising future takes place, showing how divorced the two ideas can be. Finally, the fact that Nora ultimately presides over Torvald is a testament to Ibsen's way of thought that freedom will ultimately preside over constriction. ...read more.