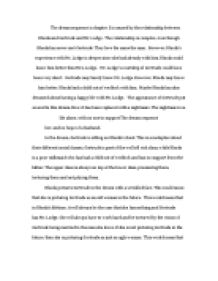 The dream sequence in Chapter 3 of &quot;The Withered Arm&quot;.

﻿The dream sequence is chapter 3 is caused by the relationship between Rhoda and Gertrude and Mr. Lodge. The relationship is complex, even though Rhoda has never met Gertrude. They love the same the man. However, Rhoda?s experience with Mr. Lodge is deeper since she had already with him. Rhoda could know him better then Mrs. Lodge. Mr. Lodge?s courtship of Gertrude could have been very short. Gertrude may barely know Mr. Lodge. However, Rhoda may know him better. Rhoda had a child out of wedlock with him. Maybe Rhoda has also dreamed about having a happy life with Mr. Lodge. The appearance of Gertrude put an end to this dream. Now it has been replaced with a nightmare. The nightmare is a life alone, with no one to support The dream sequence her, and no hope of a husband. ...read more.

This would mean that her life is even more unfair. Not only will Mr. Lodge not marry her or even support, but he will marry someone ugly instead of her. It is as if he married an ugly woman to spite her. We often think of people with hard lives, like Rhoda?s life, as dreaming of better lives. Rhoda does not dream of a better life. Instead, she dreams of a worse life. She dreams of a life where Mrs. Lodge is sitting on her, and taunting her. This is not actually happening. Rhoda has not met Mrs. Lodge. Mrs. Lodge probably does not know who Rhoda is, or that she is the mother of Mr. Lodge?s son. Rhoda must feel hopeless. She cannot dream of better things. The language that Hardy uses is very violent and it emphasizes the fact that Rhoda is having a brutal nightmare. ...read more.

When we think of life at this time, we think of the harsh life of the poor in the cities. The dream reminds us of the harsh life in the countryside as well. Hardy describes Mrs. Lodge?s presence as an incubus. An incubus is a person who, or thing that oppresses like a nightmare. Or it is an evil spirit that is supposed to descend upon sleeping people. This is exactly what happens in the dream. We do not use this word much today. The word was probably used much more in Hardy?s time. People were more superstitious then than today. They were more likely to believe in evil spirits. The word incubus would have had more meaning for them than for us. The dream sequence could be a turning point for Rhoda. Either she will decide that she must accept her life, and forget about a future with Mr. Lodge. She could also do something to try to ruin Mr. Lodge and Gertrude, such as telling Gertrude about the child. ...read more.