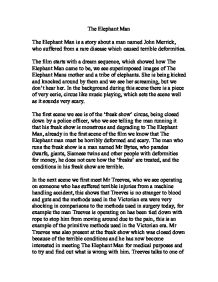 The Elephant Man The Elephant Man is a story about a man named John Merrick, who suffered from a rare disease which caused terrible deformities. The film starts with a dream sequence, which showed how The Elephant Man came to be, we see superimposed images of The Elephant Mans mother and a tribe of elephants. She is being kicked and knocked around by them and we see her screaming, but we don't hear her. In the background during this scene there is a piece of very eerie, circus like music playing, which sets the scene well as it sounds very scary. The first scene we see is of the 'freak show' circus, being closed down by a police officer, who we see telling the man running it that his freak show is monstrous and degrading to The Elephant Man, already in the first scene of the film we know that The Elephant man must be horribly deformed and scary. The man who runs the freak show is a man named Mr Bytes, who parades dwarfs, giants, Siamese twins and other people with deformities for money, he does not care how the 'freaks' are treated, and the conditions in his freak show are terrible. In the next scene we first meet Mr Treeves, who we see operating on someone who has suffered terrible injuries from a machine handling accident, this shows that Treeves is no stranger to blood and guts and the methods used in the Victorian era were very shocking in comparisons to the methods used in surgery today, for example the man Treeves is operating on has been tied down with rope to stop him from moving around due to the pain, this is an example of the primitive methods used in the Victorian era. Mr Treeves was also present at the freak show which was closed down because of the terrible conditions and he has now become interested in meeting The Elephant Man for medical purposes and to try and find out what is wrong with him. ...read more.

In stark contrast, in the next scene we scene the janitor bringing in drunk people who paid him to for a glimpse of John, from the pub he was drinking in, when they all see him in his room, they scream and scare John, this creates more sympathy for him because even though for the first time in his life, he is being treated well and cared for by Treeves and others, he is still being paraded by the janitor as a freak and an animal in a circus. Treeves invites John to his house for tea, he John meets Treeves' wife, and he begins to cry because he tells them he has never been treated so friendly and nice by a beautiful woman, this is where we see that not only is John highly intelligent, he also has feelings too. Treeves then shows John pictures of his mother, and family, in politeness John then shows Treeves and his wife a picture of his own mother he keeps with him, "she had a face of an angel, I must have been such a disappointment to her" he says. Treeves wife then begins to cry, because she cannot understand what kind of a life he has had. Her crying creates more sympathy for John. The next day we are also show that John has a creative side, he is making a model of the church he can see from his window. John asks Treeves if he is able to cure his deformities, and he becomes sad when Treeves, with dismay, says he cannot do anything for him. After news of 'The Elephant Man' staying at the hospital spreads across London, a famous stage actress, announces she would like to meet John and get to know him, as he sounds very interesting. They both meet and she gives him a signed picture of herself and a copy of Romeo and Juliet. ...read more.

This is faded right to the end and then we see one last dream sequence, of Johns mother saying "No one ever dies", which in a way is true because he was one of a kind, and will always be remembered as being different from everyone else. It ensures that the last scene in the film of John's death is very emotional to the viewer. My thoughts on the film are that it is very well directed and acted, all the characters played there parts amazing well, especially Hurt who played Merrick with emotion and passion, even though he was covered in heavy make-up all the time during the film, his depiction of Merrick was so believable, it was hard not to believe he actually was 'The Elephant Man'. The Film was shot in black and white, a decision which was hard to make, and when it was shot colour had been available for decades, but the director made the right choice, because if it had been shot in colour then it would of lost all the darkness in the film, the black and white made the sad scenes in the film especially moving because they were so blunt and colourless. The film makes you think about a lot of things, because of all the emoticon it brings out of you, it especially makes you think about treating people with disabilities with respect, and trying to not treat them any different to someone without one. The whole point of the film is to ask us the question who are the freaks? The people in the freak show or the people who go to see them? It points the finger at Victorian people and at us it asks what kind of society do we live in? Do we see ourselves as any better as the Victorians, who went to see freak shows, or is there still a certain discrimination against people with disabilies or different races? Even though we treat people better then the Victorians, banning freak shows they used to have, we are still treating people who are different to us differently. ...read more.