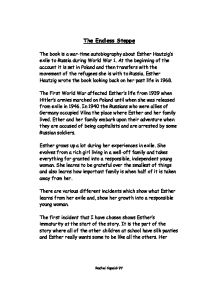 The Endless Steppe The book is a war-time autobiography about Esther Hautzig's exile to Russia during World War 1. At the beginning of the account it is set in Poland and then transfers with the movement of the refugees she is with to Russia. Esther Hautzig wrote the book looking back on her past life in 1968. The First World War affected Esther's life from 1939 when Hitler's armies marched on Poland until when she was released from exile in 1946. In 1940 the Russians who were allies of Germany occupied Vilna the place where Esther and her family lived. Ether and her family embark upon their adventure when they are accused of being capitalists and are arrested by some Russian soldiers. Esther grows up a lot during her experiences in exile. She evolves from a rich girl living in a well-off family and takes everything for granted into a responsible, independent young woman. She learns to be grateful over the smallest of things and also learns how important family is when half of it is taken away from her. ...read more.

It also shows how rich Esther was and how perfect her life was to be worried so much about not having silk panties. The next incident that shows Ether's progression as a character is when they are at the train station after beginning their exile and Grandfather Solomon is separated from Esther, her father, her mother and her grandmother. Grandmother is devastated and Esther starts to think about how other people are feeling. Here are some quotes from this part of the story. "My grandmother cried out." "Never have I heard a more dreadful scream, not even in a nightmare." "My grandfather shuffled past us without a word." "With one hand I stroked my grandmother's arm as she sobbed openly, and with the other hand I clung to my father, clung fiercely lest he too be taken away from me." From this incident Esther begins to learn how traumatic life can be and how harshly exile will treat her. She learns that throughout her experience she will feel mixed feelings and be anxious about how other expect her to react. ...read more.

This meant the family was going to be split up again and Esther was going to have to grow up even more and do even more to help. Her mother and grandmother are just as devastated as she is with the news and grandmother has only started to recover from the loss of her husband. She fears she will lose her son as well. This incident is testing for Esther. Here are some quotes from this event. "I felt an ill wind blow through the hut" "I watched his face as he read. It had gone white..." "I finally extracted the terrible truth" "...Front Lines!..." "I don't want to be brave. I'm sick and tired of being brave. Tata please don't go..." "But we are all alone here in Siberia..." "Mother wept...My worst fears were confirmed..." "I stayed in the hut, still weeping" From this incident Esther learns that she is going to have to be strong once more to help her family through this difficult time. Her mother and grandmother are just as devastated as her so she has no one to turn to for comfort. She has to be strong and manage alone." Rachel Capaldi 9Y ...read more.