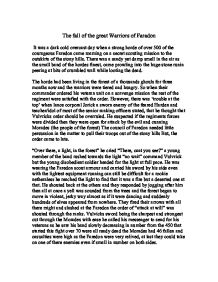 The fall of the great Warriors of Faradon

The fall of the great Warriors of Faradon It was a dark cold overcast day when a strong horde of over 500 of the courageous Faredon came roaming on a secret scouting mission to the outskirts of the stony hills. There was a sandy yet damp smell in the air as the small band of the hordes finest, came prowling into the huge stone runin peering at bits of crumbled wall while looting the dead. The horde had been living in the forest of a thousands ghouls for three months now and the warriors were tiered and hungry. So when their commander ordered his veteran unit on a scavenge mission the rest of the regiment were satisfied with the order. However, there was 'trouble at the top' when lance corporal Jorick a sworn enemy of the feared Harden and teacher/idol of most of the senior ranking officers stated, that he thought that Vulvricks order should be overruled. He suspected if the regiments forces were divided then they were open for attack by the evil and cunning Morades (the people of the forest) ...read more.

slowly decreasing in number from the 450 that started this fight over 70 were all ready dead the Morades had 46 fallen and casualties were high as the Faredon were very relived, at last they could take on one of there enemies even if small in number on both sides. Vulvicks messenger although experienced had a long run to find the veteran scavenge party whom, were obliviously eager to attend the fight that was raging. When he finally got there a good 8 minutes later the squad were geared to fight as they have had no action for three months now they grabbed what they could mainly food and water but some rare weapons like single handed axes and poison tipped arrows for there archers. As the men sprinted to site of the battle they were glad although slightly shock that neither side had given in to the other the messenger was the first to be struck as a sickening blow to the head crushed his tilted helmet killing him instantly. Gorack second commander of the horde and leader of the scavenge mission rushed to the fallen soldiers side killing his opposing warrior with a sharp ...read more.

Vulvick had three Morades in front of him and two at the rear he had know choice he thrashed at the heads of the three in front striking two yet killing one he felt the sharp pain in his back as he flung him self round taking one of the Morades heads with it he felt another pain in his left shoulder this multiplied as seven arrows one after the other were shoot by yulckz himself with perfect pin point precision into the back of the amour plated warrior. Vulvick dropped to his knees in silent flop and looked two his right there he saw Gorack with four of his veterans trying franticly to save him his eyes filled with blood as he saw a sword approach, behind it stood yulckz smiling. There Faredon horde was now too few and without leadership the end was coming and they knew it. There was nothing else to do, the Faredon now out numbered twenty-four to one threw up there weapons by order of Gorack. The round up of the prisoners took only minutes and the burials only hours. ...read more.