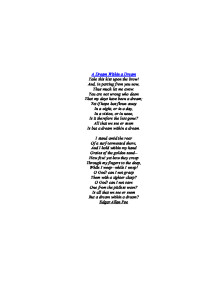 A Dream Within a Dream Take this kiss upon the brow! And, in parting from you now, Thus much let me avow: You are not wrong who deem That my days have been a dream; Yet if hope has flown away In a night, or in a day, In a vision, or in none, Is it therefore the less gone? All that we see or seem Is but a dream within a dream. I stand amid the roar Of a surf-tormented shore, And I hold within my hand Grains of the golden sand-- How few! yet how they creep Through my fingers to the deep, While I weep--while I weep! O God! can I not grasp Them with a tighter clasp? O God! can I not save One from the pitiless wave? Is all that we see or seem But a dream within a dream? Edgar Allan Poe The Father of Modern Detective Stories - Edgar Allan Poe Edgar Allan Poe was born on 19 January 1809 in Boston and passed away on 7 October in Baltimore. ...read more.

Military Academy at WestPoint. After another quarrel with Allan, Poe no longer received aid from his foster father. Poe then took the only method of release from the Academy, and got himself dismissed on March 6, 1831. In May 16, Poe married 13-year-old Virginia Clemn. Then, he got fired from his job of editor of the "Southern Literary Messenger", due to his drinking habits, and went to New York City with Virginia in 1837. From 1838 to 1844, however, Poe lived in Philadelphia where he edited magazines and became a feared yet respected critic. At that time, Poe had also started writing mystery stories. 1844, Poe returned to New York City and worked on the "Evening Mirror". He later edited and owned the "Broadway Journal". In 1845," The Raven And Other Poems" won Poe fame worldwide. The following year, he rented Fordham Cottage. There he wrote "The Literati of New York City for Godey's Lady's Book". ...read more.

or the death of his young wife Virginia, whom he married when she was thirteen and who died at twenty-four. Perhaps as a result of the many personal traumas he endured, Edgar Allan Poe was unafraid of taking his readers for a walk on the dark side. "Who shall say where the one ends, and the other begins?" Poe's compelling use of descriptive language and symbolic imagery were masterful in any literary form -- in short stories like "The Murders in the Rue Morgue," "The Black Cat, "The Masque of the Red Death," or in poems like "The Raven" and "Annabel Lee." In the world of literature, Edgar Allan Poe is amongst the popular authors. Poe's source of happiness was writing poetry, but he also raised the short story to an art form. His dark, gothic tales of mystery and imagination had heavy influence on the modern thriller. A master of horror tales and detective stories, Edgar Allan Poe has been given the title of "The Father of Modern Detective Stories". ~~~~~~~The End~~~~~~~ ...read more.