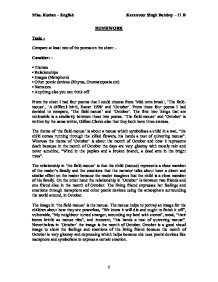 'The field-mouse' and 'October' is written by the same writer, Gillian Clarke also that they both have three stanzas. The theme of 'the field-mouse' is about a mouse which symbolises

HOMEWORK Task: - Compare at least two of the poems on the sheet: - Consider: - � Themes � Relationships � Images (Metaphors) � Other poetic devices (Rhyme, Onomatopoeia etc) � Narrators � Anything else you can think off From the sheet I had four poems that I could choose from 'Mid-term break', 'The field-mouse', 'A difficult birth, Easter 1998' and 'October'. From these four poems I had decided to compare, 'The field-mouse' and 'October'. The first two things that are noticeable is a similarity between these two poems. ...read more.

The relationship in 'the field-mouse' is that the child (mouse) represents a close member of the reader's family and the emotions that the narrator talks about have a direct and similar effect on the reader because the reader imagines that the child is a close member of his family. On the other hand the relationship in 'October' is between two friends and one friend dies in the month of October. The living friend expresses her feelings and emotions through metaphors and other poetic devices using the atmosphere surrounding the world around, in October. ...read more.

Nevertheless in 'October' the image is the month of October. October is a good visual image to show the feelings and emotions of the living friend because the month of October is very gloomy and depressing which helps because she uses poetic devices like metaphors and symbolism to express a certain emotion. The style of the narrator in 'the field-mouse' is in the first person perspective, but 'October' is also in the first person perspective. This is because both the poems narrator uses 'my' and 'we' in his sentences. The structure of both the poems is similar because they both have three stanzas which are uneven and also they both do not rhyme. ?? ?? ?? ?? Miss. Keeton - English Karanveer Singh Bembey - 11 B 1 ...read more.