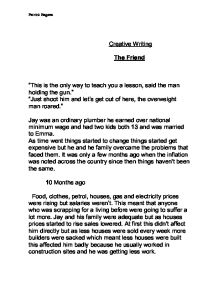 Creative Writing The Friend "This is the only way to teach you a lesson, said the man holding the gun." "Just shoot him and let's get out of here, the overweight man roared." Jay was an ordinary plumber he earned over national minimum wage and had two kids both 13 and was married to Emma. As time went things started to change things started get expensive but he and he family overcame the problems that faced them. It was only a few months ago when the inflation was noted across the country since then things haven't been the same. 10 Months ago Food, clothes, petrol, houses, gas and electricity prices were rising but salaries weren't. This meant that anyone who was scrapping for a living before were going to suffer a lot more. Jay and his family were adequate but as houses prices started to rise sales lowered. At first this didn't affect him directly but as less houses were sold every week more builders were sacked which meant less houses were built this affected him badly because he usually worked in construction sites and he was getting less work. As days turned into weeks work diminished fewer and fewer houses were being built. One day as Jay was about to set off to work he noticed a letter lying on the floor by the front door. It had in capitals and his address and name, he opened it at a snails pace, as he pulled it out he noticed that his was from his employer, his heart started beating rapidly. To Jay Davidson Due to the rapidly and unexpected decline of work and the increase of material prices we are have to let some of our staff go. We are sorry that we couldn't talk face to face, due to the vast number of employees getting discharged we don't have the needed time to talk to them all. ...read more.

The group broke up and everyone went their own way, as Jay was making his way home Jaime pulled up in a nice Mercedes and he told him to get in, he did as he was told. "So are you excited about the job on Sunday, asked Jaime?" "Yeah I pumping with adrenaline, Jay lied." "Good, because it's going to be the hardest job we've ever done but we'll succeed," replied Jaime. Jaime then asked Jay where he lived so that he would drop him off, for the rest of the trip they didn't say a word to each other. When Jay arrived he crept up the stairs and to his bedroom, Emma was fast asleep and snoring, he carefully and slowly got into the bed. He tried to sleep but he couldn't he was thinking about what he had just got himself into. The next day he was anxious and started to question himself again about the 'job'. "Are you going to look for a job today or what, asked Emma." "I will later on I am just tired right now, replied Jay" The day worn on slowly which Jay thought was a good thing. At 1pm he went to the job centre to check if they had any jobs that fitted his criteria, he man behind the counter went to one of the offices and was in there about 10 or more minutes. When he came back he said that there was a job going and if he was interested he had to go to a meeting at the Monday at 10.30am. As Jay made his way home he wondered what he should choose a safe job which will give him pension after he retires or a risky job where he might earn a lot of money but there's no guarantee that he will live to enjoy it. When he got home there was no one there, there was a note stuck on the TV it read We have gone to the hospital my mum isn't feeling well. ...read more.

He alerted Trauma who pulled out a gun and fire a shot which hit Jaime at the back of the leg dropping him instantly. The three men walked up to Jaime who was still trying to drag himself to his car Marley kicked him in the side and said that that was for threatening him. Trauma handed the gun to Jay who was shocked "Take it and do the right thing, think of it was a initiation test a way if you to become a proper legit gang member" said Trauma. Jay looked at the gun then handed it to Trauma " I might be a lot of things but a murderer is not one of them" said Jay. With that he walked out of the harbour called a cab and went home. When he got there the house was empty he had one eventful day but at the end of the day he saw that crime doesn't pay. The next day he went for the job interview which he got surprisingly even though he wasn't the most educated person applying for it. As he walked out he saw a red Ferrari he immediately recognised it as Trauma's car, he walked up to it and saw Trauma and Marley. "So was choosing a legal job better than being in our gang" he asked. "You knew about me wanting this job?" Jay asked. "I like to research my friends in crime, good luck in your new job remember if you ever need anything I am here. A friend in need is a friend in deed. Keep safe" said Trauma. Marley didn't say much just waved at him and smiled, as the two men drove of Jay wondered whether or not they had anything to do with him getting the job. When he arrived home his wife and kids were back the twins were playing video games and his wife in the kitchen cooking. When he told her about his new job she cried in joy. ?? ?? ?? ?? Patrick Bagaza ...read more.