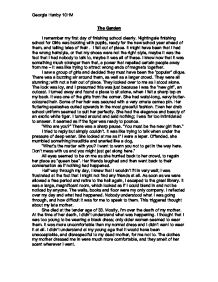 The Garden I remember my first day of finishing school clearly. Nightingale finishing school for Girls was buzzing with pupils, ready for the new school year ahead of them, and telling tales of their . I felt out of place. It might have been that I had the wrong hairstyle, or that my shoes were not the right style, maybe it was the fact that I had nobody to talk to, maybe it was all of these. I know now that it was something much stranger than that, a power that repelled certain people away from me - it was like trying to attract wrong ends of magnets together. I saw a group of girls and decided they must have been the "popular" clique. There was a buzzing air around them, as well as a larger crowd. They were all stunning; with not a hair out of place. They looked over to me as I stood alone. The look was icy, and I presumed this was just because I was the "new girl", an outcast. I turned away and found a place to sit alone, when I felt a sharp tap on my back. ...read more.

He started to walk away. He turned around and said "Oh, okay. Good night. And may I say that you have the prettiest eyes I have ever seen." I blushed violently, and went back to my book about wild animals. * That night I had a spectacularly vivid dream. I could see luscious green grass and fragrant flowers filled the space. I saw the beautiful colours of the wildlife; exotic birds and unidentifiable mammals. There was a small spinney which caught my eye; the branches were waving slowly in the cool breeze, and a pool of sparkling water beside it. The landscape was truly beautiful; it was like being in a different world. I saw my mother reflected in the water where I leant over. She looked as beautiful as ever, as beautiful as a rose. She was slightly different from what I remember, as if she had bloomed further. Her face was a little more blushing and her nose was slightly more pointed. Her strawberry-blonde locks looked just like mine, as well as her beautifully deep blue-green eyes. I realised after a few seconds that this was not my mother, but I. ...read more.

I knew that inside, I wanted to stay. I wanted to stay with him forever, but simply had to go. I left after a couple of minutes. I was ecstatic; I couldn't have asked for more than a friend at that point in my life. I don't know what I would have done without somebody to understand me, at least for one day. I never did ask what he was doing at our girls' school that day; the thought never crossed my mind whilst our conversation was flowing. It flowed like a river, never ending, and as we continued to meet it stayed that way. We shared our secret desires and passions, as well as sharing the stories of our past. Together, we also discovered that we could enter the garden with each other. I don't know how it happened, but as we held each other in a warm embrace, the light appeared. We did so more and more, and over the days, weeks and months, the garden appeared to bloom - just like our friendship. The garden's wildlife became more and more stunning. Even the non-living pool appeared to be spilling with life. He was my only friend, and I wanted it to stay that way, forever. ?? ?? ?? ?? Georgia Hanby 10HM ...read more.