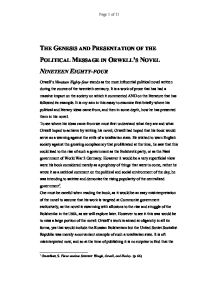 The Genesis and Presentation of the Political Message in Orwell&amp;#146;s Novel Nineteen Eighty-four

THE GENESIS AND PRESENTATION OF THE POLITICAL MESSAGE IN ORWELL'S NOVEL NINETEEN EIGHTY-FOUR Orwell's Nineteen Eighty-four stands as the most influential political novel written during the course of the twentieth centaury. It is a work of prose that has had a massive impact on the society on which it commented AND on the literature that has followed its example. It is my aim in this essay to examine first briefly where his political and literary ideas came from, and then in some depth, how he has presented them in his novel. To see where his ideas came from we must first understand what they are and what Orwell hoped to achieve by writing his novel, Orwell had hoped that his book would serve as a warning against the evils of a totalitarian state. He wished to warn English society against the growing complacency that proliferated at the time, he saw that this could lead to the rise of such a government as the Bolshevik party, or as the n**i government of World War 2 Germany. However it would be a very superficial view were his book considered merely as a prophesy of things that were to come, rather he wrote it as a satirical comment on the political and social environment of the day, he was intending to satirize and demonise the rising popularity of the centralised government1. One must be careful when reading the book, as it would be an easy misinterpretation of the novel to assume that his work is targeted at Communist government exclusively, as the novel is swarming with allusions to the rise and struggle of the Bolsheviks in the USSR, as we will explore later. However to see it this was would be to miss a large portion of the novel: Orwell's work is aimed at oligarchy in all its forms, yes that would include the Russian Bolshevism but the United Soviet Socialist Republic was merely a convenient example of such a totalitarian state. ...read more.

Orwell's fable is however rather more refined than Zamyatin's by which he was inspired, so changes to the genre are inevitable. Where Zamyatin sets his work 600 years from the date it was written, Orwell was quick to realise that doing this isolated his reader from the story, it was hard for someone to become involved in a world that bared so little resemblance to our own. Consequently when deciding a time setting for his novel Orwell chose a time around 40 years after the time he finished writing it, this enabled him to make any changes to the world he liked, and still allow his audience to identify with the life of his protagonist.13 Another vital part of the setting of the novel is the society in which the plot takes place. In most novels this is important, however in Nineteen Eighty-four it is VITAL to the successful operation of the book as a political fiction. The society that Orwell constructs is a clear hierarchical pyramid, beginning with the omnipotent semi-divine leader Big Brother, and ending with the driven slaves of this world: The proles. Orwell's ideas on totalitarianism are better portrayed the more segregated he can make the society appear, so he writes of a world that has class separation in the most extreme sense conceivable. He enhances the distinction through contrasts between the living conditions of the Inner Party and the rest of the world, we can see this in everything that Orwell describes about O'Brien's existence, he has servants, plush carpet and the right to switch of his telescreen. The difference can perhaps be most clearly seen in the cigarettes, Winston smokes from a "crumpled packet" dry, badly packed cigarettes that dispel their contents onto the floor should one be so incautious as to hold them upright, in contrast to O'Brien who smokes tightly packed cigarettes with a silky air about them, taken from a shining silver case. ...read more.

This happens because as one reads the text the reader doubtless remembers the full poem, knowing the final line "Here comes a chopper to chop off your head", it is hard to relax as one sees its approach. This increase in tension serves Orwell's political purpose he wishes to focus the reader on the helplessness before the Party that Winston and Julia are victim to, the feeling that their defeat is inevitable adds to this, and is furthered by Orwell's use of the Rhyme. Above all Orwell's literary methods serve to create a book that has stood as one of the greatest political writings of all time, these techniques have allowed Orwell to write a novel that is impossible to read without being changed forever. Merely skimming through the text for the sake of escapism, which surely was never Orwell's purpose, it is inevitable that Orwell's political beliefs will leave their mark on the reader. This novel has spawned a thousand fictions of its type, and many great works such as the novel A Handmaids Tale by Margaret Atwood or the film Brazil owe their lineage to the work of Orwell. More than this the ideas that his idea of language as explored in the book have influenced the English tongue forever, words such as "Doublethink" and "Newspeak" will go down in the dictionary for all time, as will an adjective that I think he would be proud of "Orwellian". However the scope of influence of Nineteen Eighty-four goes beyond literature even beyond language, to the very subject on which he was commenting. Nineteen Eighty-four changed politics forever, Orwell's warning, along with others of the time was indeed heeded, and humanity was diverted from a path that could easily have been as self-destructive as that described in the novel. I believe that congratulations are in order to the great man George Orwell for producing a political fiction that has eternally changed mankind, Thankyou. ...read more.