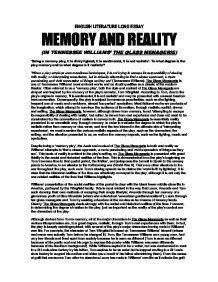 ENGLISH LITERATURE LONG ESSAY MEMORY AND REALITY (IN TENNESSEE WILLIAMS' THE GLASS MENAGERIE) 'Being a memory play, it is dimly lighted, it is sentimental, it is not realistic'. To what degree is the play memory and to what degree is it realistic? "When a play employs unconventional techniques, it is not trying to escape its responsibility of dealing with reality, or interpreting experience, but is actually attempting to find a closer approach, a more penetrating and vivid expression of things as they are" (Tennessee Williams). The Glass Menagerie is one of Tennessee Williams' most eminent works and no doubt qualifies as a classic of the modern theater. Often referred to as a 'memory play', both the style and content of The Glass Menagerie are shaped and inspired by the memory of the play's narrator, Tom Wingfield. According to Tom, due to the play's origins in memory, 'it is sentimental, it is not realistic' and may be presented with unusual freedom from convention. Consequently, the play is subject to numerous peculiarities, such as dim lighting, frequent use of music and overblown, almost 'too-perfect' symbolism. Most fictional works are products of the imagination, which attempt to convince the audience of its realism, through realistic conflict, drama and setting. The Glass Menagerie, however, although drawn from memory, is not 'attempting to escape its responsibility of dealing with reality', but rather, is drawn from real experience and does not need to be constrained by the conventions of realism to convey truth. The Glass Menagerie is essentially reality presented in an unrealistic way, through memory. In order to evaluate the degree to which the play is realistic rather than memory or vice versa, and how the two interact in the ultimate aim of 'interpreting experience', we must examine the various realistic aspects of the play, such as the characters, the setting, and the situation presented to us, as well as the memory aspects, such as the lighting, music and symbolism. ...read more.

Therefore, 'it omits some details, others are exaggerated'. The play is very much shaped by Tom's sub-conscious, resulting in a number of peculiarities. Firstly, because the events of The Glass Menagerie are filtered through Tom's perception, the audience feels as Tom would have felt and sees things as Tom would see them. Resultantly, certain attributes of other characters are exaggerated. This is most evident in the character of Amanda Wingfield. For example, from the beginning of the play, as the Wingfield family dines, Amanda's irritating and meddlesome nature is amplified, as she complains that he shouldn't 'push with his fingers', he does not chew enough and he 'smokes too much'. It is difficult to determine whether she was really this unpleasant in actual fact, but in Tom's perception she was and this is exaggerated in his memory. This is again exemplified strongly in the sixth scene as Amanda and Laura prepare for the gentleman caller's coming. The conversation between Amanda and Laura is one which Tom would not have even witnessed (as he was not present), therefore the conversation would have been filled in by his own memory and Amanda's aggravating nature would be clearly amplified. This is evident on a number of occasions throughout the conversation, especially when she tells Laura, her own daughter, 'to be painfully honest, your chest is flat'. Evidently, having been filtered through Tom's perception, the vexatious nature of Amanda Wingfield is exaggerated greatly throughout The Glass Menagerie. This emphasis on memory in the interpretation of characters serves to highlight these characters' most important idiosyncrasies. However, the exaggeration of character's attributes is not the only result of the events being interpreted by Tom's memory. As The Glass Menagerie is shaped by the memory of Tom Wingfield, who has a 'poet's weakness for symbols', the 'memory play' exaggerates a number of symbolic events throughout. A strong example of this is in the fourth scene, when Laura slips at the fire escape as she leaves the apartment; an event which is symbolic of the fact that she cannot survive in the outside world. ...read more.

Amanda and Laura Wingfield are behind Tom in the physical space of the stage as well as in time. However, Tom cannot escape the memory of his family and they are clearly visible to the audience. This scene, while conveying the idea of Tom's inability to truly escape his family, is also symbolic of just how integral the memory aspects are in The Glass Menagerie. It is only in memory that such a juxtaposition, of Tom's final speech with the inaudible scene in which Amanda speaks to her daughter, is possible. A play constrained by the conventions of realism would not be able to present such an effective juxtaposition. This is indicative of the essentiality of memory in the play's production. The memory aspects of the play, although 'sentimental' and 'not realistic', do not compromise the realism or truth being conveyed by the production itself, but simply provides a creative and often exaggerative method of imparting this truth. Ultimately, in order to evaluate the degree to which The Glass Menagerie is memory and the degree to which it is reality, we must determine how the two interact in the distinct aim of finding 'a more penetrating and vivid expression of things as they are'. It is impossible to dispute that the very core of the play is realism, in its characters, in the social and historical background and in the situation portrayed, while the presentation of the play is 'sentimental' and 'not realistic' through dim lighting, exaggerated symbolism, and other memory aspects. The play is quite obviously constructed, to a great degree, of both memory and reality. However, the various unrealistic features of memory in no way compromise the truth of the play, but simply work towards intensifying the focus on the important aspects of reality. Essentially, the main effect of memory in the play is to enhance the sense of reality surrounding its content. After all, The Glass Menagerie, as Tom says, is committed to giving its audience 'truth in the pleasant disguise of illusion'. By Vinay Menon ...read more.