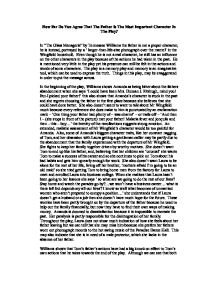 The Glass Menagerie - How Far Do You Agree That The Father Is The Most Important Character In The Play?

How Far Do You Agree That The Father Is The Most Important Character In The Play? In "The Glass Menagerie" by Tennessee Williams the father is not a proper character, he is instead, portrayed by a ' larger-than-life-size photograph over the mantel' in the Wingfield household. Even though he is not a real character, he still has an influence on the other characters in the play because of the actions he had taken in the past. He is mentioned very little in the play yet his presence can still be felt in the actions and words of some characters. The play is a memory play and memory is an imaginative tool, which can be used to express the truth. Things in this play, may be exaggerated in order to put the message across. In the beginning of the play, Williams shows Amanda as being bitter about the fathers abandonment when she says 'I could have been Mrs. ...read more.

When she realises that Laura hasn't been going to her lessons she says ' so what are we going to do the rest of our lives? Stay home and watch the parades go by?...we won't have a business career... what is there left but dependency all our lives? I know so well what becomes of unmarried women who aren't prepared to occupy a position...' she understands that if Laura doesn't get a husband or a job then she doesn't have much hope for the future. These worries have been partly brought on by the departure of the father because he used to help out the family financially, but now they have to find their own ways of making money. Amanda is doomed to dissatisfaction because it is impossible to recreate the past. Her paralysis is partly responsible for the disintegration of her family. Throughout the play, Laura does not show much indication of how she feels about her father leaving but we can tell that she may miss him because she prefers her fathers worn out phonograph records to the hot swing music of the Paradise Dance Hall. ...read more.

He sounds disgusted with himself and his father when he tells Jim about his plans 'the b*****d son of a b*****d' this shows that maybe, as he had to experience how his mother and sister reacted when his father left, even though he wants to do the same thing, he has to try and do it with as little pain caused as possible. This may also show that his father has had a big impact on the final decision he makes and his guilt that he feels at the end of the play. Overall, I do not believe that the father is the most important character in the play but his character still has a significance and without him, Tom's feelings about the decision he decided to take may be different. Also, if the father hadn't left then Amanda's attitude towards both of her children may have also been different, for example, she may not have to nag Tom to do his work so much and she may not be as worried about Laura not having gentleman callers. ...read more.