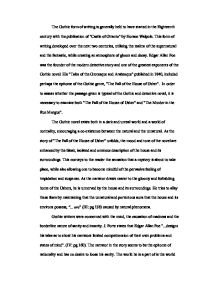 The Gothic form of writing

The Gothic form of writing is generally held to have started in the Eighteenth century with the publication of "Castle of Otranto" by Horace Walpole. This form of writing developed over the next two centuries, utilising the realms of the supernatural and the fantastic, while creating an atmosphere of gloom and decay. Edgar Allan Poe was the founder of the modern detective story and one of the greatest exponents of the Gothic novel. His "Tales of the Grotesque and Arabesque" published in 1840, included perhaps the epitome of the Gothic genre, "The Fall of the House of Usher". In order to assess whether the passage given is typical of the Gothic and detective novel, it is necessary to examine both "The Fall of the House of Usher" and "The Murder in the Rue Morgue". The Gothic novel exists both in a dark and unreal world and a world of normality, encouraging a co-existence between the natural and the unnatural. As the story of "The Fall of the House of Usher" unfolds, the mood and tone of the novel are enhanced by the bleak, isolated and ominous description of the house and its surroundings. ...read more.

138) and concludes that any investigation of the manipulative powers of these effects over the mind is "...beyond our depth."(III: pg. 139) This he feels is a "... a mystery all insoluble" and states that if the house and its surroundings did not look so depressing and did not cause him to suffer "...a sense of insufferable gloom"(III: pg 138), then this feeling of forbidding would not be so transparent in his mind. "The Murders in the Rue Morgue" deals with the seemingly mysterious and puzzling murders of two women in their apartment. The complexity and unusual circumstances of their deaths leaves the police completely baffled by the case and someone of supposedly superior intellect and mental acumen is needed to solve the murders. 'Dupin' the detective and his companion the narrator, use analysis to solve the case. There are no "shadowy fancies"(III: pg 138), as in "The Fall of the House of Usher", everything is calculated and logical. The fundamental difference between the passage from the "House of Usher" and Poe's detective story is that, in the former the mystery is "all insoluble", while exploring the restricted subjects of incest and the mind. ...read more.

In order to be considered as part of the Gothic genre the passage from "The Fall of the House of Usher" and the story, "The Murders in the Rue Morgue", have to follow certain criteria. The dark and forbidding features which highlight the supernatural countenance of the "The Fall of the House of Usher" are certainly conducive to the Gothic novel. Also the perception of mystery and suspense created as the story delves into the hidden and sublime world of the subconscious, while exploring hidden agenda's that supposedly should not be discussed in "decent" society, certainly qualify the story as belonging to the Gothic style. The "Murders in the Rue Morgue", while following the same pattern of using horror, mystery and a sense of pervasive gloom does not however, seem to be able to align itself with this genre. There is no supernatural element involved. The story is recounted with rational explanation and it is logic that is used to solve the crime. This means the story is explained as it develops, rather than it developing by itself, as "The Fall of the House of Usher" does, thereby allowing it to remain enveloped in the Gothic shroud of mystery and suspense. ...read more.