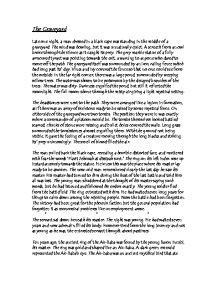 The Graveyard Late one night, a man dressed in a black cape was standing in the middle of a graveyard. The wind was howling, but it was unnaturally quiet. A screech from an owl broke through the silence as it caught its prey. The grey marble statue of a fully armoured tyrant was pointing towards the exit, a warning to anyone who dared to move off the path. The graveyard itself was surrounded by an iron railing fence which had long past its' day. Vines and ivy covered the fence so that no one could see from the outside. In the far right corner, there was a large pond, surrounded by weeping willow trees. The water was shown to be poisonous by the decayed branches of the trees. The water was dirty. Darkness engulfed the pond, but still it reflected the moonlight. The full moon shone through the misty air giving a light mystical setting. The headstones were next to the path. They were arranged like a legion in formation, as if there was an army of skeletons ready to be raised by some mystical force. On either side of the graveyard were two tombs. The position they were in was exactly where a commander of a platoon would be. ...read more.

The wearer would be immortalized but would still look his age. The young baron was so infused with the dark side that he wished to over throw King Endon, and rule himself. The ring made this possible for him. He paused. The baron rallied supporters and soon he had a legion, with which to overthrow the monarch. At this point, the entrusted servant joined him and together they went into battle. The master had known that his first victory would have to be against the capital. If the King were to die then only small pockets of resistance would remain. The legion had numbered millions when it attacked the City and yet magically the legion was unscathed. The Capital fell to dust when the King was beheaded by one stroke of his master's sword. Cities were ransacked and whole populations slaughtered like little lambs. With the ring of Ak-Baba, the master had overturned an entire country and established the faction of the Ak-Baba. However, there had been another ring. The ring of the phoenix was the brother to the ring of Ak-baba. The phoenix ring was more powerful than its brother, but would not work without a bearer of strong heart, as it was the Ring of Goodness. ...read more.

After the Ak-Baba was destroyed, the Master knew the battle was lost, but told his followers we had not lost the war. As the great wings of the Phoenix propelled it towards the master, he had turned to the soldier and told him what to do. After fleeing the battlefield, the man hid from the wraith of the Phoenix faction as all supporters of the Ak-Baba faction were killed. Nevertheless, the servant waited, as he knew revenge would be coming soon. The ring glowed and the man knew it was time. The man chanted the words: 'Nici mort nici al Hisctei Te invoc spirit al trecerii Reda trupului ce separa omul de animal Cu ajutorul acestui magic ring.' A blue mist emitted from the ring and spread out around the graveyard. Then gave a blinding yellow light, which filled the air. Slowly but surely skeletons were rising. A hand broke through the ground. The dead were rising. BANG. A silver bullet flew through the air and when it exploded into the servant's skull, the vortex of mystical energy imploded with the man, leaving only the ring. The woman walked over, put the ring on her left hand. The rings, now together at last, could lead the woman named Misty into a new era. The era of prosperity had begun. By Steven Barker ...read more.