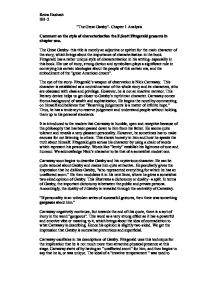 &quot;The Great Gatsby&quot;- Chapter 1 Analysis - Comment on the style of characterisation that F.Scott Fitzgerald presents in chapter one.

"The Great Gatsby"- Chapter 1 Analysis Comment on the style of characterisation the F.Scott Fitzgerald presents in chapter one. The Great Gatsby- this title is merely an adjective or epithet for the main character of the story, which brings about the importance of characterization in the book. Fitzgerald has a rather unique style of characterization in his writing- especially in this book. His use of irony, strong diction and symbolism plays a significant role in conveying his certain ideologies about the people of this certain era, and the embodiment of the "great American dream". The eye of the story- Fitzgerald's weapon of observation is Nick Carraway. This character is established as a neutral narrator of the whole story and its characters, who are obsessed with class and privilege. However, he is not an inactive narrator. This literary device helps us get closer to Gatsby's myth/man character. Carraway comes from a background of wealth and sophistication. He begins the novel by commenting on himself and believes that "Reserving judgements is a matter of infinite hope." Thus, he has a tendency to reserve judgement and understand people without holding them up to his personal standards. It is introduced to the readers that Carraway is humble, open and receptive because of the philosophy that has been passed down to him from his father. He seems quite tolerant and reveals a very pleasant personality. ...read more.

This conveys Carraway's nihilistic statement, giving into the concept of 'nothingness'. It is anticipated from the first few paragraphs of the book, that the main theme of the book is Gatsby's presence and his power of challenging Nick's outlook on the world. We soon find that Gatsby isn't what he initially appears to be. Behind his money and vulgarity, Nick sees his personality as "gorgeous". It is also exposed that money is a major theme in the novel and it represents America and materialism in the twentieth century. This leads to the relationship of the Buchanans to their social position, which is very different compared to Nicks; regardless of the fact that they both come from the same elite background. Fitzgerald creates an invisible line of diversity between them with the symbolism of the areas in which they live in. Carraway lives at West Egg- whereas the Buchanans live at East Egg. These opposites represent the diversity of their ways of life. Carraway's character seems to be more down-to-earth, whereas the Buchanans are a restless, rich couple with a keen interest in money. The next few paragraphs are Nick's comments on Tom Buchanan's character. The writer uses Carraway's keen eye for observation to capture a vast amount of Tom's physical features, along with some obvious personal ones. Tom was described as a feared football player at college and this brings out his grotesque character, in complete scarcity of appeal. ...read more.

Her friend Jordan's character is kept rather discrete and we don't find out much about her. This is the writer's way of keeping the focus on Daisy's sensuality. However, she does seem similar to Daisy in the sense that their white dresses cover up certain aspects of corruption which are shown later in the story. Finally, Carraway returns to describing Gatsby when he first sees him. We now recognise Gatsby to be a lonely and solitary figure, with various impressions of royalty, mysticism and a vibe of wanting to be alone. To Nick, Gatsby is almost worshiped- mysteriously. His loneliness makes Nick wonder about him "coming out to determine what share of their local heavens". In this scene, we first see Gatsby reaching out towards a green light that he "cannot grasp", which is an example of Fitzgerald's powerful use of symbolism in the novel. The green-light represents something that Gatsby is striving to gain possession of. Over all, F.Scott Fitzgerald presents a unique style of characterization in the way that it varies with each character. To stress on the contrast between the personalities, he uses a difference in tone, diction and creativity to convey the main features in the characters, and does this very successfully. With the use of Carraway as an active narrator, he creates a bond of trust with his keen eye to observe and analyse. With this device, we obtain a vivid and dichotomous impression for each character, which anticipates many ironies and further impressions yet to come. Reina Hashash IB1-2 ...read more.