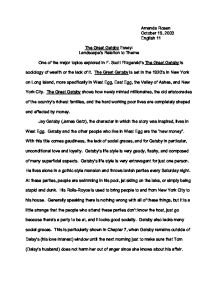 Amanda Rosen October 19, 2003 English 11 The Great Gatsby Essay: Landscape's Relation to Theme One of the major topics explored in F. Scott Fitzgerald's The Great Gatsby is sociology of wealth or the lack of it. The Great Gatsby is set in the 1920's in New York on Long Island, more specifically in West Egg, East Egg, the Valley of Ashes, and New York City. The Great Gatsby shows how newly minted millionaires, the old aristocracies of the country's richest families, and the hard working poor lives are completely shaped and effected by money. Jay Gatsby (James Gatz), the character in which the story was inspired, lives in West Egg. Gatsby and the other people who live in West Egg are the "new money". With this title comes gaudiness, the lack of social graces, and for Gatsby in particular, unconditional love and loyalty. Gatsby's life style is very gaudy, flashy, and composed of many superficial aspects. Gatsby's life style is very extravagant for just one person. ...read more.

Although, Gatsby does show character and true loyalty in a sense by taking the blame for Myrtle's death for Daisy, it leads to his own death. It seems that even if Gatsby hadn't taken the blame, Daisy would have very likely blamed someone else. The Buchanan's (Tom and Daisy) live in East Egg which represents the old aristocracy. They may appear to have grace, wealth, and elegance but they lack heart and are self absorbed. The difference between Gatsby and the Buchanan's is, Gatsby seems to goes over the top with most things and the Buchanan's are somewhat more practical but only when compared to Gatsby. Gatsby lives alone in a mansion while Tom and Daisy live in a large home but there are three of them living in the house. Gatsby buys things because he can but Tom and Daisy buy things because they need or want them. ...read more.

George's hopelessness is seen by the way he loves and idolizes Myrtle. He is devastated by her death because the only "witness" is the eyes on the billboard. In the end, George kills the man he thinks killed Myrtle, and kills himself because he does not want to live without his wife or what he has done. Unlike the wealthy who live in East Egg and West Egg, George has morals, values, and less money but that has made him a better person. The Great Gatsby shows the hardships of the rich and poor living together in the 1920's in America, as well as a strong point of the richer people being much more superficial and the less wealthy having more character, morals and better values. Everything is like the end of the world for these characters. There is love, death, past and present lovers, deceptions and lies, all in the attempt to show the sociology of wealth or the lack of it. ...read more.