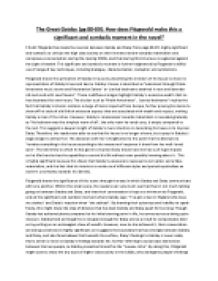 The Great Gatsby (pg 88-89): How does Fitzgerald make this a significant and symbolic moment in the novel?

﻿The Great Gatsby (pg 88-89): How does Fitzgerald make this a significant and symbolic moment in the novel? F.Scott Fitzgerald has made the reunion between Gatsby and Daisy from page 88-89, highly significant and symbolic to criticize the high class society on their immense desire towards materialism and conspicuous consumption during the roaring 1920s, and that during this time love is neglected against the sight of wealth. This significant and symbolic moment is further heightened by Fitzgerald?s skillful use of range of key techniques, including dialogue, characterization, metaphor and symbolisms. Fitzgerald shows the symbolism of Gatsby?s house by describing the interiors of his house to show its representation of Gatsby?s love and desire. Gatsby?s house is described as ?wandered through Marie Antoinette music rooms and Restoration Salons? or ?period bedrooms swathed in rose and lavender silk and vivid with new flowers?. These mellifluous images highlight Gatsby?s excessive wealth that he has decorated his own house. The diction such as ?Marie Antoinette? , ?period bedrooms? implies the fact that Gatsby?s interior contains a range of items imported from Europe, further proving his desire to show off his style of old British aristocrat aspects that are associated with wealth and respect, making Gatsby a man of the riches. ...read more.

However, now he has achieved it, their conversation are being constricted is highly significant as it suggests the boundary that has emerges between Gatsby and Daisy, and also foreshadows that beneath the surface, Daisy?s feelings to Gatsby is never really there, which is ironic to Gatsby?s feelings towards her, further referring to social class distinctions between the two people, as Gatsby presented himself as the ?neveau riche?. By doing this, Fitzgerald might want to show the dry souls of higher class society in the 1920s, who disregards people?s feelings for the sake of their satisfactions on seeing materialisms. Fitzgerald also shows the significance of this scene through Gatsby?s behavior and thoughts. The description of Nick?s ?Once he nearly toppled down a flight of stairs? of Gatsby highlights his intoxication of love to Daisy. Fitzgerald presents Gatsby as a hopeless romantic as the intensity of his feeling is stretched while ?Daisy took the brush with delight?. This fact suggests an inner insight to Gatsby?s character of whether or not it is Daisy?s appearance in the first place is what makes Gatsby falls in love with her, as her seductiveness that is obvious in the Flapper era is what attracts Gatsby. ...read more.

The fact that she?s crying over shirts is Fitzgerald?s way of criticizing the materialism of the 20s, and he?s trying to show Daisy?s love of worldly things and security. This is symbolic as the shirt becomes a metaphor for Gatsby?s wealth. Daisy?s true nature is truly revealed by her actions and ?it makes me sad? might be suggestive of her regret towards marrying Tom, because those shirts wouldn?t belong to hers. Therefore, Daisy?s complete focus on the clothing shows that she has lost sight of her true feelings for Gatsby. In conclusion, I have learnt that through the way and techniques used in significant and symbolic moment is presented in, Fitzgerald is able to weave an intricate web of meanings, interpretations and thoughts on the purpose of serving the readers. By presenting different aspects of this section, we can see that the intense present that Gatsby longs for is an impossible dream. By having the shirt scene the most significant and symbolic, it can be seen that Daisy herself is Gatsby?s American dream. Daisy?s character is shallow, greedy and concerned with nothing but pure wealth and material luxury. Gatsby's failure to realize this represents America?s failure to realize that the American Dream isn't that perfect. ...read more.