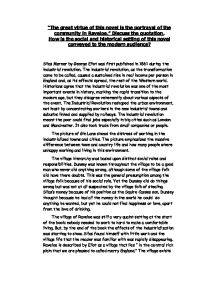 &quot;The great virtue of this novel is the portrayal of the community in Raveloe.&quot; Discuss the quotation. How is the social and historical setting of this novel conveyed to the modern audience?

"The great virtue of this novel is the portrayal of the community in Raveloe." Discuss the quotation. How is the social and historical setting of this novel conveyed to the modern audience? Silas Marner by George Eliot was first published in 1861 during the industrial revolution. The industrial revolution, as the transformation came to be called, caused a sustained rise in real income per person in England and, as its effects spread, the rest of the Western world. Historians agree that the industrial revolution was one of the most important events in history, marking the rapid transition to the modern age, but they disagree vehemently about various aspects of the event. The Industrial Revolution reshaped the urban environment, not least by concentrating workers in the new industrial towns and suburbs linked and supplied by railways. The industrial revolution meant the poor could find jobs especially in big cities such as London and Manchester. It also took trade from small companies or people. The picture of Gin Lane shows the distress of working in the industrialized towns and cities. The picture emphasizes the massive difference between town and country life and how many people where unhappy working and living in this environment. The village hierarchy was based upon distinct social roles and responsibilities. Dunsey was known throughout the village to be a good man who never did anything wrong, although some of the village folk did have there doubts. This was the general presumption among the village folk because of his social role. Yet the Dunsey did do things wrong but was not at all suspected by the village folk of stealing Silas's money because of his position as the Squire Casses son. Dunsey thought because he had all the money in the world he could do anything he wanted, but yet he could not find happiness or love, apart from the love of drinking. ...read more.

The pace of life in Raveloe is very relaxed, we can see in chapter twenty-one that Eppie and Silas are prepared for there journey to Lantern Yard. They are prepared for the journey to take many days and are not seen to be in any sort of hurry. It is a slow paced life, a 'region of carriers' carts and slow wagons'. Eliot portrays the villagers as been very superstitious especially about Silas in the second chapter. 'he invited no comer to step across the door-sill, and he never strolled in to the villageto drink a pint at the Rainbow'. They are suspicious because Silas is different and his industrial skills and herbal treatments are not known to any of the villagers- therefore they find this suspicious. Silas is seen to the community in Raveloe as an alien- he sees them in the same way. Silas was a weird man 'who came from nobody knew where', this is why the community found him hard to accept. His herbal healing, which is described as Silas's 'stuff', became the whole communities talking point when Silas cured Sally Oates. Silas could have become part of the community but decided not too as he had still lost all trust in mankind. 'Silas found himself and his cottage suddenly beset by the mothers who wanted him to charm away the whooping,' here I think Eliot is trying to emphasize to the reader that you cant judge a book by its cover, or, don't judge somebody until you get to know them. The community of Raveloe suddenly like Silas, although they are still curious, they believe Silas is a better man because he can cure illnesses. Religion features a lot in this book especially when Silas begins to restore his faith in mankind. His restoration in mankind and his restoration in believing in god parallel each other, as Silas restores his faith in mankind he also restores his faith in god. ...read more.

Our society does have a parallel- a parallel the same as the Victorians we are longing for the old but an unstoppable force is driving us further and further in to the new. E.g.- computers we are quite happy with the standard of technology but yet there are always people who are greedy and want more. In a way this is good because nothing would even change if we didn't have people who want to strive further, is there a time when we are going to know too much- is that time now? All these are questions that are always asked. There is still Parallels between town and village live and these are evident, like Raveloe the people in villages are very close knit, while the people in industrialized towns, although many people do now get along with each other there is still an element of Lantern Yard in the industrialized towns and cities today. I think Lantern Yard is a Microcosm for the industrialized towns and cities today. Although the towns and cities are not half as bad as there were in Lantern Yard you can still see a similarity in the two. Industrialized towns are still grim looking and there is still an element of competitiveness but the machines rules man and the Puritan evangelicalism has not completely gone but is not as obvious in today's industrialized towns and cities. I think the moral of this novel is to show that no amount of money can ever replace love or happiness. I think this is completely true you can have all the money in the world but still not be happy. I think money makes you selfish and self-centered. This glorifies the past village life because they did not have much money but they all loved one another and they were happier than the Squires family, who had all the money in the world which just proves my point. We can relate it to Elvis Presley - he had all the money in the world yet he wasn't happy and took a drugs overdose and died. ...read more.