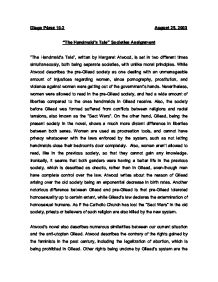 Diego P�rez 10-2 August 29, 2003 "The Handmaid's Tale" Societies Assignment "The Handmaid's Tale", written by Margaret Atwood, is set in two different times simultaneously, both being separate societies, with unlike moral principles. While Atwood describes the pre-Gilead society as one dealing with an unmanageable amount of injustices regarding women, since pornography, prostitution, and violence against women were getting out of the government's hands. Nevertheless, women were allowed to read in the pre-Gilead society, and had a wide amount of liberties compared to the ones handmaids in Gilead receive. Also, the society before Gilead was formed suffered from conflicts between religions and racial tensions, also known as the "Sect Wars". On the other hand, Gilead, being the present society in the novel, shows a much more distant difference in liberties between both sexes. Women are used as procreation tools, and cannot have privacy whatsoever with the laws enforced by the system, such as not letting handmaids close their bedroom's door completely. ...read more.

Atwood describes the contrary of the rights gained by the feminists in the past century, including the legalization of abortion, which is being prohibited in Gilead. Other rights being undone by Gilead's system are the right for women to vote, and their access to contraception devices. At the same time, Atwood criticizes the situation experienced in the 1980s regarding the fear towards pollution and infertility, by reflecting such dangers in the pre-Gilead society, and coming up with Gilead as the solution for both problems. A more recent issue mentioned in "The Handmaid's Tale" is North America's religious policies, which are unfair, and are expressed in an exaggerated way through the wall with the citizens who have suffered death penalty, and the "Sect Wars". Elements that aren't important in real life carry a large importance in "The Handmaid's Tale". ...read more.

This may be seen throughout the novel, where you can see that women are treated like objects of procreation. In a sense, Gilead has only brought inconformity into the world, as women cannot read, write, or do things by their own, and men live a boring life, according to their descriptions, as most have had their sexual and philosophical liberties taken away as well. "I used to think of my body as an instrument, of pleasure, or a means of transportation, or an implement for the accomplishment of my will... Now the flesh arranges itself differently. I'm a cloud, congealed around a central object, the shape of a pear, which is hard and more real than I am and glows red within its translucent wrapping." (Chapter 13). This quote expresses that Offred feels her womb is now a state's property, and that she has been oppressed by the society so that she appears to be just a superficial part of what she really is. ...read more.