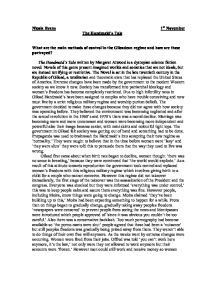 The Handmaid's Tale - What are the main methods of control in the Gileadean regime and how are these portrayed?

Nicola Evans 1st November The Handmaid's Tale What are the main methods of control in the Gileadean regime and how are these portrayed? The Handmaid's Tale written by Margaret Atwood is a dystopian science fiction novel. Novels of this genre present imagined worlds and societies that are not ideals, but are instead terrifying or restrictive. The Novel is set in the late twentieth century in the Republic of Gilead, a totalitarian and theocratic state that has replaced the United States of America. Extreme changes have been made by the government to the modern Western society as we know it now. Society has transformed into patriarchal ideology and women's freedom has become completely restricted. Due to high infertility rates in Gilead Handmaid's have been assigned to couples who have trouble conceiving and now must live by a strict religious military regime and worship puritan beliefs. The government decided to make these changes because they did not agree with how society was operating before. They believed the environment was becoming neglected and after the s****l revolution in the 1960's and 1970's there was a moral decline. Marriage was becoming more and more uncommon and women were becoming more independent and powerful also their image became sexier, with mini skirts and colourful tight tops. The government in Gilead felt society was getting out of hand and something had to be done. ...read more.

The truth is 'she is my spy and I am hers,' so if one of them fails to meet any of the regulations it is the other Handmaids responsibility to report them. However in reality each is waiting for the other to branch out with a true exchange of confidence after all they are both experiencing the same thing and must long for somebody to talk to about it. In chapter 6 it describes how executed bodies are 'hanging by their necks,' on the wall. The government displays these bodies to the public to show they have committed 'crimes.' Each body has a 'placard hung around his neck to show why he has been executed.' One of them has 'a drawing of a human foetus,' to show he has been killed for giving somebody an abortion. However this 'crime,' was legal in previous existence. These men are like 'time travelers, anachronisms.' Gilead uses the bible to justify patriarchal authority because they believed it originated from the bible. The idea for 'Handmaids,' came from the 'Rachel and Leah stuff,' in the bible. Rachel was unable to have children so she used her maid as a stand in 'Behold my maid Bilhah, she shall bear upon my knees, that I may also have children by her.' This was a biblically sanctioned tradition; therefore it is the law of God so it should not be questioned. ...read more.

People were also given a defined role in society and were made to wear a colour coded outfit according to your status. This made it easier to control people but it also took away their individuality. Religion was a major form of social control; it justified patriarchal authority because it originally comes from the bible. Brainwashing was also used as a form of control to persuade women that their bodies are disgusting and their only function in society is to produce children. Atwood presents all of these methods of control as a realistic possibility to frighten us and to get us to think about our own lives. This dystopian science fiction novel presents a nightmare world which came about due to the attitude of people in society. People began to neglect the environment and they had no morals therefore a new regime was introduced to control the way people lived and take away their freedom because the government believed the way they were living their lives was wrong and this new regime would control how they lived. Atwood intends this novel to be a wake up call to us. She criticizes modern day society because she wants us to consider problems that exist in our world today. This tale is one of a warning, if problems in our society become uncontrollable Gilead could happen to us too one day. ...read more.