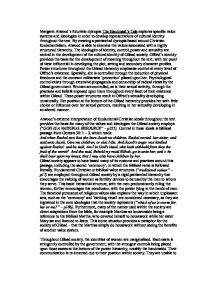 Margaret Atwood's futuristic dystopia The Handmaid's Tale explores specific value systems and ideologies in order to develop representations of cultural identity throughout the text. By creating a patriarchal dystopia based around Christian fundamentalism, Atwood is able to examine the values associated with a highly structured hierarchy. The ideologies of identity, control, power and sexuality are central in the development of the cultural identity of Gilead society. Offred's identity provides the basis for the development of meaning throughout the text, with her point of view influential in developing the plot, setting and secondary character profiles. Power structures throughout the Gilead hierarchy emphasise control at every level of Offred's existence. Spatially, she is controlled through the reduction of physical freedoms and the constant militaristic 'protection' placed upon her. Psychological control exists through extensive propaganda and censorship of radical views by the Gilead government. Women are controlled, as is their s****l activity, through the practices and beliefs imposed upon them throughout every facet of their existence within Gilead. These power structures result in Offred's sexuality developing unnaturally. Her position at the bottom of the Gilead hierarchy provides her with little choice or influence over her s****l partners, resulting in her sexuality developing in an altered manner. Atwood's extreme interpretation of fundamental Christian ideals throughout the text provides the basis for many of the values and ideologies the Gilead society employs ("GOD IS A NATIONAL RESOURCE" - p225). ...read more.

Ultimately, however, Offred's identity is affected by her circumstances. Her own core values are corrupted, expressed through her frequent liaisons both with the Commander and with Nick ("this forbidden room where I have never been, where women do not go" - p146). In effect she is rebelling against the controls placed upon her by society, she is also, however, corrupting her own promise to be faithful to her lost husband Luke, who she hopes to see once again. The circumstances of her existence have changed her outlook on life. By employing a rigid hierarchal system, with militaristic-type control, citizens of Gilead, in particular the handmaids, have very little spatial freedom. Offred's room provides only the basic facilities required to survive: "A chair, a table, a lamp...a window, two curtains...a bed. Single mattress medium-hard, covered with a flocked white spread. Nothing else takes place in the bed but sleep; or no sleep...the window only opens partly and is shatterproof. I live, I breathe." - pp17, 18 This description provides a military or prison-type clinical atmosphere. There is a lack of beauty, comfort or choice - a direct reflection of the society in which she exists. The Handmaid's every movement is tracked through the use of passes and 'compuchecks' in an attempt to control their access to the rest of society ("We produce our passes...they are inspected and stamped" - p31). Ironically, handmaids are also considered 'sacred' ("these two men who aren't yet permitted to touch women" - p32) ...read more.

To get knocked up, to get in trouble" - p273) in this way she develops a greater sense of power by being able to choose when to meet Nick and also by having some say in what they do together. Quite far from being a mutual relationship it is merely a power struggle in an attempt to receive physical contentment for both parties. Due to the caste structures, women and men are prevented from having equal and mutual relationships. The value systems and ideologies employed by the Gilead society develop a cultural identity based around a patriarchal hierarchy of identity, power, control and sexuality. Towards the top of the hierarchy, the Commanders are free to exhibit many of their personality traits and ideas that contribute towards their own unique identity. This is in contrast to the removal of identity towards the bottom of the hierarchal structure, with the Handmaids being forced to mask all their physical, emotional and psychological attributes with those developed by the rulers of Gilead. Power is also distributed disproportionately throughout the various caste structures, with the Commanders having the majority of power within the society and the Handmaids essentially having none. This disproportioned power structure between each gender in turn leads to the development of unnatural relationships developing, with love and desire surpassed by physical s****l activity. Ultimately Atwood's dystopia of Gilead portrays the negative consequences an unbalanced patriarchal hierarchy can have and that disjointed power structures result in a disjointed society. ...read more.