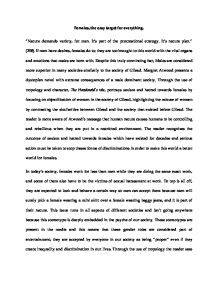 Females, the easy target for everything. "Nature demands variety, for men. It's part of the procreational strategy. It's nature plan." (298). If men have desires, females do to; they are too brought to this world with the vital organs and emotions that males are born with. Despite this truly convincing fact, Males are considered more superior in many societies similarly to the society of Gilead. Margret Atwood presents a dystopian novel with extreme consequences of a male dominant society. Through the use of tropology and character, The Handmaid's tale, portrays sexism and hatred towards females by focusing on objectification of women in the society of Gilead, highlighting the misuse of women by contrasting the similarities between Gilead and the society that existed before Gilead. The reader is more aware of Atwood's message that human nature causes humans to be controlling and rebellious when they are put in a restricted environment. The reader recognizes the outcome of sexism and hatred towards females which have existed for decades and serious action must be taken to stop theses forms of discriminations in order to make this world a better world for females. In today's society, females work for less than men while they are doing the same exact work, and some of them also have to be the victims of s****l harassment at work. To top is all off, they are expected to look and behave a certain way so men can accept them because men will surely pick a female wearing a mini skirt over a female wearing baggy jeans, and it is part of their nature. ...read more.

The skirt is ankle length, full, gathered to a flat yoke that extends over our b*****s the sleeves are full," (9). Through this detailed imagery, the quote shows the restrictions on the handmaids and how they can't expose themselves to the men of Gilead, the color and appearance of the clothing is simple and boring, reflecting on their jobs as handmaids who just have one specific duty and that is to repopulate Gilead, their lack of freedom is shown as they have no choice, personality and individuality. The shoes "flat-heeled" shows that they can't present their sensuality, on the other hand, the wives that wear high heels shows power, control and a stimulant for s****l needs. The importance of the color red to the comparing of blood symbolizes fertility and womanhood; it also symbolizes danger for the people of Gilead to stay away from the handmaids. It also reminds the reader of a fairytale "the little red riding hood" hence, it is ironic because the life of a handmaid is nothing like a fairytale and they are represents political prostitutes. Moreover Gilead's regime is extra strict on females, the violence towards is seen during the mass execution. "Beneath the hems of the dresses the feet dangle, two pairs of red shoes, one pair of blue. If it weren't for the ropes and the sacks it could be a kind of dance, a ballet, caught by flash-camera; mid-air. ...read more.

In addition to this, there is sexism in the futuristic society after Gilead, where the speaker, Professor Piexioto, jokes about the Underground femaleroad, and refers to as a frailroad, meaning a weak or breakable road suggesting that females are weak and easy to repress upon. The professor seems more interested in the identity of the Commander but not the human sufferings of Offred who was victimized by the Commander and the regime of Gilead. It is ironic that during this conference the minority were females, only one female professor was present at the conference which proves that even though this society, the society of 2195, is still s****t, some female rights have been reclaimed. In conclusion, The Handmaid's tale presents extreme forms of sexism and hatred towards females, and repetition of this sexism is present in culture's preceding and following Gilead which proves that sexism is widespread in societies, today. Usually females are targeted to physical and emotion abuse from men, this is not only wrong but something that scars one for life. Men are men and women are women. Both have some specialties. And in that particular area one should be respected by the opposite and should be assigned to lead. So leading an example and not becoming a bystander will contribute to the awareness of sexism and equality can be formed. And even though it is in human nature for men to manipulate and take advantage of females, females should take a step and fight for their rights. Therefore, the message is that females should not be contended within their society and should change for their benefits. ...read more.