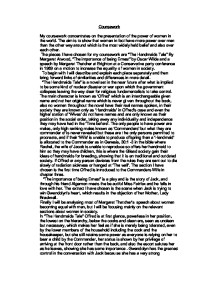 &quot;The Handmaids Tale&quot; By Margaret Atwood, &quot;The importance of being Ernest&quot; by Oscar Wilde and a speech by Margaret Thatcher at Brighton at a Conservative party conference in 1969 on a motion to increase the equality of women in society.

Coursework My coursework concentrates on the presentation of the power of women in the world. The aim is to show that women in fact have more power over men than the other way around which is the most widely held belief and also over each other. The pieces I have chosen for my coursework are "The Handmaids Tale" By Margaret Atwood, "The importance of being Ernest" by Oscar Wilde and a speech by Margaret Thatcher at Brighton at a Conservative party conference in 1969 on a motion to increase the equality of women in society. To begin with I will describe and explain each piece separately and then bring forward links of similarities and differences in more detail. "The Handmaids Tale" is a novel set in the near future after what is implied to be some kind of nuclear disaster or war upon which the government collapses leaving the way clear for religious fundamentalists to take control. The main character is known as 'Offred' which is an interchangeable given name and not her original name which is never given throughout the book, also no women throughout the novel have their real names spoken, in their society they are known only as 'Handmaids' in Offred's case and even the higher station of 'Wives' do not have names and are only known as their position in the social order, taking away any individuality and independence they may have had in the 'Time before'. ...read more.

make women equal with women, also in "The importance of being Earnest" Lady Bracknell does not allow Jack to marry Gwendolyn because of his past, with his lack of a clear past which is not good enough for her daughter Gwendolyn. All characters speak in Standard English but in "The handmaids Tale" most people are in the middle class and speak using elision whereas in "The Importance of being Earnest" all the characters are obviously from an upper class upbringing and speak in an elevated manner and use no elision which is part of their raised sociolect which enhances the effect of their speech has; 'it is hardly a matter that she could be allowed to arrange herself...' which Margaret Thatcher also does, as speeches are meant to be formal and have to be done in a certain manner, with no slang or Phatic to maintain the level of formality whereas a play or novel can include both these features, "The Importance of being Earnest is incredibly formal, perhaps too formal for real speech but includes Phatic talk when the writer is trying to imitate natural speech, but only from Jack when he wants to start a conversation with Gwendolyn but she sees through his intentions easily; 'Pray don't talk to me about the weather, Mr. Worthing. Whenever people talk to me about the weather, I always feel quite certain that they mean something else. I am never wrong.' ...read more.

Offred's position ion her household is unclear, she is underneath Serena but no one is sure if she is below or above the other servants as it is 'too soon' so she is treated with respect but held in low regard. Margaret Thatcher does not use imperatives as she is trying to persuade her audience and does so well, instead she urges her audience to read the proposal, she displays the current way of things as illogical and almost absurd by mentioning odd statistics made by men to keep women in the house and unfounded claims and rules by corporations for unequal pay between men and women. In conclusion it is apparent that women have the greater position in my pieces with men unexpectedly being lower in the hierarchy, the women often control most conversations and seem to have great power even though, especially in "The Handmaid Tale" women socially are supposed to have lower status because of the time period and circumstances but it is the opposite, the women have the power over the men so they are actually in control even though it is not what society as a whole expects, they break the gender stereotypes that are in our minds, they are not the weak willed, submissive s*x that they are 'supposed' to be, they are equally strong as the men, if not more so, changing our expectations of the genders where men were thought to speak twice as much as women and had greater control it is the women who speak the most as see in the pieces I have chosen. By Ashley Latty 2568 words ...read more.