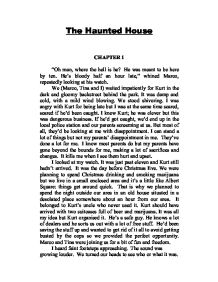 The Haunted House CHAPTER 1 "Oh man, where the hell is he? He was meant to be here by ten. He's bloody half an hour late," whined Marco, repeatedly looking at his watch. We (Marco, Tina and I) waited impatiently for Kurt in the dark and gloomy backstreet behind the park. It was damp and cold, with a mild wind blowing. We stood shivering. I was angry with Kurt for being late but I was at the same time scared, scared if he'd been caught. I knew Kurt; he was clever but this was dangerous business. If he'd got caught, we'd end up in the local police station and our parents screaming at us. But most of all, they'd be looking at me with disappointment. I can stand a lot of things but not my parents' disappointment in me. They've done a lot for me. I know most parents do but my parents have gone beyond the bounds for me, making a lot of sacrifices and changes. It kills me when I see them hurt and upset. I looked at my watch. It was just past eleven and Kurt still hadn't arrived. It was the day before Christmas Eve. We were planning to spend Christmas drinking and smoking marijuana but we live in a small enclosed area and it's a little like Albert Square: things get around quick. That is why we planned to spend the night outside our area in an old house situated in a desolated place somewhere about an hour from our area. It belonged to Kurt's uncle who never used it. Kurt should have arrived with two suitcases full of beer and marijuana. It was all my idea but Kurt organised it. He's a safe guy. He knows a lot of dealers and he sorts us out with a lot of free stuff. He'd been saving the stuff up and wanted to get rid of it all to avoid getting busted by the cops so we provided the perfect opportunity. ...read more.

Oh, well...um... I... I was just...erm... just going to the toilet," he managed to say followed by what sounded like a guilty laugh. "Oh ok," I said after he finished his horse-like-laugh. It would have made me laugh but I wasn't in the mood. I saw him nod slightly as he turned around and headed slowly to the toilet. I had no choice but to return to my mission trying to get to sleep. My fear seemed to have gone which made me more at ease but I still didn't feel sleepy. Suddenly, an idea popped into my head; I could count rabbits coming out of a rabbit hole until Marco returned from the toilet: One, two, three, four... two-hundred and seventeen, two-hundred and eighteen... zzz. I drifted off to sleep sometime after the number two-hundred and eighteen but I didn't notice Marco go past my open door. CHAPTER 3 Creak. Creak. Creak. CRACK! "Owww, damn floor boards!" I heard someone yell. I shot up out of bed and ran into the hallway to see what had just happened and I found Marco half sticking out of the floor. "Hey man, what the hell are you doing down there? Stop messing about and get up," said Kurt as he passed Marco on his way to the bathroom. Marco must have woken everyone up with that accident. I checked my watch and it was eight in the morning. I wondered where he had been this time. I grabbed his hand and pretended to have trouble pulling him out of the hole. "Man, you are so fat. You shouldn't eat too much or you'll end up making holes in the roads," I said as I tugged at him. "It wasn't my fault. I was walking so carefully over the blasted floorboards," he said with glint of anger in his tone. "Where were you coming back from anyway? ...read more.

The bulky thing which had been covered yesterday was uncovered today. It had four holes spread wide and it had a large blade hovering above. I worked out that it was used during the Victorian times for execution. The blade was dripping with blood. Three of the holes were filled with bodies with no heads. The three heads were on the floor covered in blood. They were Marco's, Tina's and Kurt's. I felt sick. I almost vomited. My head felt dizzy and my legs were wobbly. I took hold of myself and I ran. I kicked the doors open and headed forward. I didn't stop until I reached the car. I swung the door open and pulled the keys out from under the seat and I screwed the car into gear and drove it out of there as fast as I could. Tears were rolling down my face. I still felt sick; my best friends had just been killed in the most horrifying and terrifying way possible and I couldn't do anything about it. My head ached and I couldn't think straight. I opened the window slightly to give me some air. A thought crossed my mind and I suddenly braked right in the middle of the road. I felt so empty- the images of my friends appeared before me. I closed my eyes but their faces were deeply stored in my head. Kurt was smiling at me whilst Tina and Marco gazed at each other. I could not fight the overwhelming desire to be with them. I tried to put the car into gear and drive it forward but their haunting faces compelled me to stop. An invisible force was holding me back. Whatever happened I wasn't going to leave my friends, even if it meant death. The snow started to fall. I turned the car and I drove really slowly. I was going back into the house. I was going to spend Christmas with my friends... THE END ...read more.