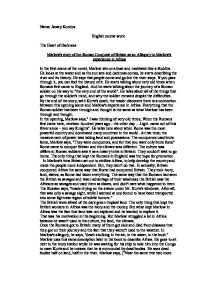 Name: Janaty Kondos English course work The Heart of Darkness Marlow's story of the Roman Conquest of Britain as an Allegory to Marlow's experience in Africa In the first scene of the novel, Marlow sits on a boat and meditates like a Buddha. He looks at the water and as the sun sets and darkness comes, he starts describing the river and its history. He says that people come and go but the river stays. If you pass through it, you can feel the history of it. He starts talking about very old times when Romans first came to England. And he starts talking about the journey of a Roman soldier on his way to "the very end of the world". He talks about all of the things that go through the soldier's mind, and why the soldier remains despite the difficulties. By the end of the story, with Kurtz's death, the reader discovers there is a connection between this opening scene and Marlow's experience in Africa. Everything that the Roman soldier has been through and thought is the same as what Marlow has been through and thought. In the opening, Marlow says," I was thinking of very old times, When the Romans first came here, nineteen hundred years ago - the other day ...Light came out of this River since - you say Knights". He talks here about when Rome was the most powerful country and dominated many countries in the world .At that time; the measurement of power was taking land and possessions. ...read more.

But in Marlow case it was different, Marlow's first motivation that made him go to Africa was the fact that he wanted to explore the land, but then it all changed his motivation that made Marlow stay in Africa was the fact that he wanted to meet Mr Kurtz and that's why Marlow stayed in Africa not like the other people, the other people stayed in Africa because the wanted to put there hands on the Ivory and take some of it for their pocket. So that leads us to our next point in the first scene when Marlow is describing When the Roman solders came to conquer England he mentions this sentence " to mend fortunes" what he means here when the Roman soldier went with the tax collector when they finished collecting the money he used to take a bit to his own pocket . but when it came to Marlow's time the people that worked with Marlow in Africa the used to take to the own pocket some of the Ivory that has been collected at that time and some even stayed there waiting for some one to leave their job or die and take over his place. Marlow then starts to talk about the land and how he feels the savagery skulking in the air and how he felt himself in a place that he shouldn't be in. He says that the Roman soldier felt the same way that Marlow felt in Africa and Marlow says" to mend his fortunes. ...read more.

At that moment we find out that we were in a circle of life, "Marlow's Life". You see every change and every conflict within him, from the beginning till the end. Although Marlow did stop hearing Kurtz echo in his head and felt librated from Kurtz he still loved him and have a special place for him in his heart that you can still feel that he adored him. Because even thought he passed that trip when he talks about it you still have the part when he talks about Kurtz which was nit such a nice experience but he excuses Kurtz on how he acted and he says that he had the right to do what he has done it is not in his hand. Well that shows you how much he was "in love " with Kurtz . Although Marlow when he first came to Africa he saw all of that stuff going on but he didn't bother to go home . I think the whole book is trying to explain that moment which you can't explain when you see a place that you don't like to be in however you stay there , waiting for something new to happen or the next deserter to happen. and you know that it is ot a safe place to be in but you stay any way like Marlow did . Maybe John Conrad explains the true Heart of Darkness. Everyone has it in his soul it is the place when you know that you are heading for trouble but you continue anyway. ...read more.