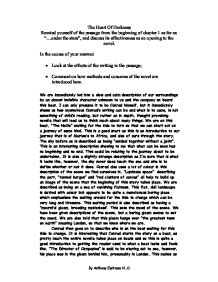 The Heart Of DarknessRemind yourself of the passage from the beginning of chapter 1 as far as &quot;...under the stars&quot;, and discuss its effectiveness as an opening to the novel. In the course of your answer:

The Heart Of Darkness Remind yourself of the passage from the beginning of chapter 1 as far as "...under the stars", and discuss its effectiveness as an opening to the novel. In the course of your answer: * Look at the effects of the writing in the passage; * Comment on how methods and concerns of the novel are introduced here. We are immediately led into a slow and calm description of our surroundings by an almost invisible character unknown to us and the company on board this boat. I can only presume it to be Conrad himself, but it immediately shows us how mysterious Conrad's writing can be and what is to come, is not something of child's reading, but rather an in depth, thought provoking novella that will lead us to think much about many things. We are on this boat, "The Nellie" waiting for the tide to turn so that we can start out on a journey of some kind. This is a good start as this is an introduction to our journey that is of Marlow's to Africa, and also of ours through the story. ...read more.

This sets the mood of the scene. We have been given descriptions of the scene, but a boring gloom seems to set the mood. We are also told that this gloom hangs over "the greatest town on earth" meaning London, so that we know where we are. Conrad then goes on to describe who is on the boat waiting for this tide to change. It is interesting that Conrad starts the story on a boat, as pretty much the entire novella takes place on boats and so this is quite a good introduction to getting the reader used to what a boat looks and feels like. "The Director of Companies" is said to be staring out to sea, however, his place was in the gloom behind him, presumably in London. This makes us wonder why he is on a boat being described as a "pilot" which is the epitome of trust to every sailor. The Lawyer is sitting on a rug and cushion because of his "many years and many virtues". This I believe is basically saying that the Lawyer is of a considerable age compared to the rest and therefore some comfort is given to him rather than the wooden boards of the boat. ...read more.

This again is hinting at death to come further into the book. The waters around the men also experience a change and become "less brilliant" than before. I can only imagine this to mean that the water no longer reflects the rays of the sun and therefore is less interesting, and instead becomes a plain blank, black lagoon of unknown depth. This could relate to Africa being the black unknown which Marlow is yet to journey into. Conrad tells us how the waters have memories of great explorers such as "Drake" and "Franklin". These explorers could be a way of Conrad hinting to us that they remain memories and that the journey we are about to take, or the crew on this boat is about to take, is fated and they will become merely memories. He describes the explorers as "the germs of empires". This interesting opinion shows us that Conrad resents the white men colonising Africa as they spread like germs, like a plague upon the earth, devouring cultures to change them to their own. If people didn't change willingly then the white men saw an opportunity to make money by using them as cheap labour and so black slaves were born. ?? ?? ?? ?? By Anthony Eastman 12, O ...read more.