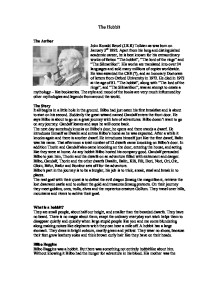 The Hobbit The Author John Ronald Reuel (J.R.R) Tolkien as was born on January 3rd 1892. Apart from his long and distinguished academic career, he is best known for his extraordinary works of fiction "The hobbit", "The lord of the rings" and "The Silmarilion". His works are translated into over 24 languages and sold many millions of copies worldwide. He was awarded the CBE (?), and an honorary Doctorate of letters from Oxford University in 1972. He died in 1973 at the age of 81. "The hobbit", along with "The lord of the rings", and "The Silmarilion", was an atempt to create a mythology - like bookseries. The style and mood of the books are very much influenced by other mythologies and legends from around the world. The Story It all begins in a little hole in the ground. Bilbo had just eaten his first breakfast and is about to start on his second. ...read more.

Bilbo's part in the journey is to be a burgler, his job is to trick, sneak, steal and break in to places. The real goal with their quest is to defeat the evil dragon Smaug the magnificent, retrieve the lost dwarwen castle and to collect the gold and treasures Smaug protects. On their journey they meet goblins, orcs, trolls, elves and the mysterius creature Gollum. They travel over hills, mountains and rivers to achive their goal. What is a hobbit? They are small people, about half our height, and smaller than the bearded dwarfs. They have no beard. There is no magic about them, exept the ordinary everyday sort wich helps them to disappear quietly and quickly when large stupid people like you and me come blundering along making noises like elephants wich they can hear a mile off. A hobbit has a large stomach. They dress in bright colours, mostly green and yellow. ...read more.

Gandalf the grey Gandalf was a wise wizard, and a powerful one. But apart from that, we never really get to know what he is. He is not an elf, not human and defently not a hobbit. He has a tall pointet blue hat, a long grey cloak, a silver scarf over his long white beard that hung down below his waist, and immense black boots. Gollum Gollum was once a creature not unlike a hobbit. He was part of a river-tribe when he found the magical ring of power. The ring casted its spell upon him, and empilfied his vicious sides. His real name was Smeagol, but along the years, as his evil sides grew stronger, his new personality named itself Gollum. Theme The Hobbit is a fantasy book. Conclution The book gave us the feeling of mytholigy, legend and mystery, that i think J.R.R Tolkien intended. We really enjoyed it, and would strongly recommend it to everybody. Althoug we are not fantasy-fans, it only took us a couple of pages to feel like a part of the Tolkien world. ...read more.