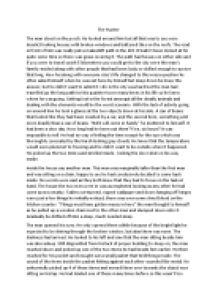 The Hunter. Protecting the townspeople gave him a sense of responsibility he never had before. - Creative Writing

﻿The Hunter The man stood on the porch. He looked around him but all that was to see were derelict looking houses with broken windows and battered tiles on the roofs. The road in front of him was really just a makeshift path in the dirt. It hadn?t been looked at for quite some time so there was grass covering it. The path had houses on either side and if you were to travel south 5 kilometres you would get to the city were the man?s family resided along with other people that had been lucky or skilled enough to survive that long. How his along with everyone else?s life changed to this was a question he often asked himself when he was out here by himself but deep down he knew the answer, but he didn?t want to admit it. Life in the city was hard but the man had travelled up the long path to this quainter town many times in his life so he knew where he was going. Getting lost in the forest amongst all the deadly animals and dealing with the elements would be the worst scenario. ...read more.

The first thing that grabbed the man?s attention was the slight ruffle of the leaves. It generally indicated that something was close by so he was on high alert. He thought he might have been hearing things when unanticipatedly a figure appeared from one of the bushes. There it was. The thing the man had been waiting for all day. ?The people back in town would appreciate this? the man whispered to himself, as any loud noises would surely scare off his prey. He glanced at it and the first thing he noticed about this creature was that it had an orange mark on its head. He knew what that meant. The man and everyone else back in the town had to wear blue bandanas to help decipher between friends, and foes. The orange mark signifies that this creature was the man?s enemy. He remained invisible in the eyes of this creature ? but he knew precisely where the creature was. He was in plain sight. ?Almost too easy? said the man. He had always been competitive. Before all this started, he was always the one to fight for whatever challenge he was taking part in. ...read more.

He raised his gun once again towards the creature. One shot in the head should do it. He pushed in the trigger halfway when the creature?s mouth opened. It was like this thing knew that its time was up. Without a moment?s notice a noise emerged from the mouth of the creature. Disregarding it, he shot it in the head. The man turned away from the now dead body and walked, slowly, back to the house. Upon opening the door, the man who was asleep, was now sitting upright in the chair, and looked emotionless. ?So? the man asked, ?Did you finish it?? ?Yes,? said the man. ?Its kind won?t cause our people any more trouble for a while now. I hope at least.? ?By the way,? said the man who was sat down, ?Did it make a move for you or make any noise before you shot it?? ?Well? said the man at the door who was now walking over to the fireplace, ?It tried to say something moments before I pulled the trigger?. ?What did it say,? questioned the man. ?It said?, the man paused, rubbed his face with his hand, glanced back and subtly said, ?Please don?t shoot, I?m not causing any harm. I?m only a child?. ...read more.