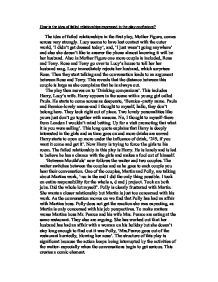 The idea of failed relationships in the first play, Mother Figure, comes across very strongly. Lucy seems to have lost contact with the outer world, 'I didn't get dressed today', and, 'I just wasn't going anywhere'

How is the idea of failed relationships expressed in the play confusions? The idea of failed relationships in the first play, Mother Figure, comes across very strongly. Lucy seems to have lost contact with the outer world, 'I didn't get dressed today', and, 'I just wasn't going anywhere' and also she doesn't like to answer the phone almost knowing it will be her husband. Also in Mother Figure one more couple is included, Rose and Terry. Rose and Terry go over to Lucy's house to tell her her husband rang. Lucy immediately rejects her husband, which surprises Rose. Then they start talking and the conversation leads to an argument between Rose and Terry. ...read more.

Now Harry is trying to force the girls to his room. The failed relationship in this play is Harry. He is lonely and is led to believe he has a chance with the girls and makes a fool out of himself. 'Between Mouthfuls' now follows the waiter and two couples. The waiter switches between the couples and as he goes to each couple you hear their conversation. One of the couples, Martin and Polly, are talking about Martins work, '-so in the end I did the only thing possible. I took on entire responsibility for the whole a, d and j project. Took on both jobs. Did the whole lot myself'. Polly is clearly frustrated with Martin. ...read more.

This creates a comic element. Mrs.Pearce then starts 'Gosforths Fete'. She turns out to be a local councillor. In this play a couple called Stuart and Milly are the centre of attention for failed relationships. Milly is pregnant by Gosforth. Milly and Gosforth are discussing their situation when a microphone becomes live. Everything they say is heard for acres and obviously Stuart hears. He is devastated and starts to swear at Gosforth and gets really drunk. This shows a failed relationship in the sense that an affair has occurred and Milly is now pregnant with another mans baby. All the relationships in this play have failed, but for different reasons. However there is a lack of communication between them. It is interesting that 'Mother Figure' is rather tragic throughout whereas 'Gosforths Fete' contains almost slapstick humour and ultimately seems to offer a little more hope for the characters concerned. ...read more.