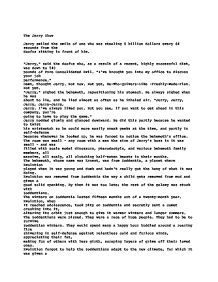 The Jerry Show Jerry smiled the smile of one who was stealing 8 billion dollars every 64 seconds from the doofus sitting in front of him. "Jerry," said the doofus who, as a result of a recent, highly successful diet, was down to 540 pounds of Pure Consolidated Evil. "I've brought you into my office to discuss your job performance." d**n, thought Jerry. Not now. Not yet, He-Who-Quivers-Like -Freshly-Made-Flan. Not yet. "Jerry," sighed the behemoth, repositioning his stomach. He always sighed when he was about to lie, and he lied almost as often as he inhaled air. "Jerry, Jerry, Jerry, Jerry-Jerry, Jerry. I've always liked you. But you see, if you want to get ahead in this company, you're going to have to play the game." Jerry nodded glumly and glanced downward. He did this partly because he wanted to twist his wristwatch so he could more easily sneak peeks at the time, and partly in self-defense because whenever he looked up, he was forced to notice the behemoth's office. The room was small - any room with a man the size of Jerry's boss in it was small - and was filled with scale model dinosaurs, pterodactyls, and various behemoth family members, all massive, all scaly, all clutching half-eaten beasts in their mouths. The behemoth, whose name was Ernest, was from Soddentia, a planet where Evolution played when It was young and dumb and hadn't really got the hang of what It was doing. Evolution was removed from Soddentia the way a child gets removed from mud and given a good solid spanking. By then it was too late; the rest of the galaxy was stuck with Soddentians. The winters on Soddentia lasted fifteen months out of a twenty-month year. Evolution, when It reached adolescence, took pity on Soddentia and secretly sent a comet crashing into it, altering its orbit just enough to give it warmer winters and longer summers. ...read more.

Tarek was edgier than usual. Maybe a few hours "breaking in the ship" would cool them off. Omlin wandered outside the ship and turned, and stared at it. It was a beauty. Sleek and fast, large and nimble. A dream ship. And when he was finished with it, it would have the best sensor systems of any ship anywhere ever. He walked ten feet away and glanced backward. The ship had disappeared. Omlin smiled. The ship also had the most advanced cloaking devices in the known universe. Omlin smiled and walked away. Who knows, he thought idly. This might actually work. Omlin's compound was housed in the dense forest of the Dilshoon world, one of the most stunning and absurd worlds known to the human species. It had three suns, so sunsets sometimes lasted for days. The landscape was beautiful in the way earth landscapes are beautiful, and the weather patterns sensible in the way that San Francisco weather patterns are sensible in other words not at all. Fog appeared for absolutely no reason. Dusk would appear hours too soon, then disappear as suddenly as it had arrived, as if late for an appointment. Warm, tropical afternoons gave way to inexplicable bouts of hail and freezing rain. It was as if the weather responded to the will of some hidden, deranged, and very bored meteorologist. Which of course, was ridiculous. The weather patterns actually responded to the will of a bug named Bob. It was Tarek who first noticed it. He and Omlin had crash-landed on Dilshoon after a nasty bit of business involving a shipment of kangaroos that had conveniently wound up in the back of Omlin's cruiser. This particular species of kangaroo had the unusual property of organically transforming the foods of its native words into precious metals when they, uh, were finished with it. Exposed to certain gases at certain pressures, the 'output' of these kangaroos could harden into ten- ounce bars of solid gold. ...read more.

She ran her hands through his head and thought, if there is a God, please let this guy stop teasing me. Tarek snapped a string of the string bikini and slowly pulled the tiny garment away from her, and she nearly cried with relief. He pressed his lips on her thigh and kissed slowly, slowly inward, pausing where the bikini was a moment ago, and then continuing until he was there, finally, right where she wanted him to be. And he stayed there until she felt, for the first time in such a long, long time, what it was like to have your whole body constrict in anticipation, to feel waves of joy swirling slowly into a tight knot in your stomach, only to be released in widening circles until your entire body was engulfed with and overrun with joy and relief. "He knows how to do things," she thought idly, because a moment later she felt it again, or something, trilling through her body, making her thighs tremble, her hips develop a mind of their own. She was more relaxed and more afire than she had ever been before. A hundred thousand inhibitions suffered a total coup de tat, and then their zero gravity intimacy really began. And for a few hours, there was no hideous attack on her homeworld that had to be avenged; there was no Daniel G. Brian who had to be destroyed. There were only two people discovering something new about themselves and each other, touching a place within themselves that each had been too afraid to visit. Hours later, when they lay, or floated, wrapped so deeply in one another that neither was clear where one's body stopped and the other's began, they both found themselves wondering if their obsessions were really worth all the trouble. All they wanted in life was to stay this close, to be loved with this intensity, this urgency, by a close friend and a good person. For a moment, this seemed to be the most important thing in all the universe. ...read more.