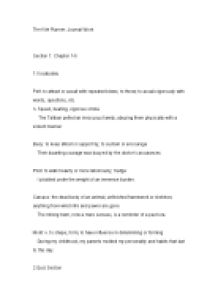 The Kite Runner. Vocabulary and Questions

ï»¿The Kite Runner: Journal Work Section 1: Chapter 1-5 1.Vocabulary Pelt: to attract or assail with repeated blows; to throw; to assail vigorously with words, questions, etc. n. Speed, beating, vigorous stroke ï The Taliban pelted an innocuous family, abusing them physically with a violent manner Buoy: to keep afloat or support by; to sustain or encourage ï Their daunting courage was buoyed by the doctor’s assurances. Plod: to walk heavily or more laboriously; trudge ï I plodded under the weight of an immense burden. Carcass: the dead body of an animal; unfinished framework or skeleton; anything from which life and power are gone ï The mining town, now a mere carcass, is a reminder of a past era. Mold: v. to shape, form; to have influence in determining or forming ï During my childhood, my parents molded my personality and habits that last to this day. 2.Quiz Section 1. From Amir’s descriptions and the behavior of the Afghan society during his childhood, what can be inferred about Hazaras and Pashtuns? The soldier refers to Hassan as a Hazara, which is an ethnic group in Afghanistan suffering from heavy racism. From descriptions such as “flat-nosed” and “Chinese Doll”, we can also learn that Hazaras assemble Asians, supported by the fact that they originally came from further east in Asia, and their features are more Asian than Arabic. It is also shown in chapter 1 to 5 that Hassan’s parents were Hazara as well. Amir and Baba, on the other hand, are Pashtun. Once, while looking through history books, Amir discovered information on the Hazara. They had an uprising during the nineteenth century, but it was brutally suppressed by the Pashtuns. The book mentions some of the derogatory names they are called and says part of the reason for the animosity is because the Hazara are Shia Muslim while the Pashtuns are Sunni Muslim. ...read more.

Hassan- Hassan, the best kite runner in the town, promises to bring the last fallen kite in the tournament. After fetching the kite he faces Assef and his friends, and gets physically and mentally harassed as Hassan refused to give up his kite or defend himself for Amir. After the rape, Amir and Hassan spend less time together, which saddens Hassan. Baba-Baba takes Amir and Hassan to buy kites from an old blind man who makes the best kites in the city. A few days before the tournament, Baba casually tells Amir he may win. An overwhelming desire to win seizes Amir as Amir thinks this will earn him Baba?s approval. After Amir wins, Baba becomes extremely pleased and treats his son with generosity and love. Section 3: Chapters 9-11 1. Vocabulary Embankment- a bank, mound, dike, or the like, raised to hold back water, carry a roadway, etc. : The consultant found that the embankment stability was adequate, provided seepage remains at low levels within the embankment. Gravel- to cover with gravel, to bring to a standstill from perplexity; puzzle. : The complicated math problems graveled me- I was not able to solve any of them Hover- to float over; keep lingering about; wait near at hand;to remain in an uncertain or irresolute state; waver : In calm conditions, the toy airplane can hover six inches from the ground. Summation- an aggregate or total; a review or recapitulation of previously stated facts or statements, often with a final conclusion or conclusions drawn from them. : My comments only apply to this brief summation, which may conflict with the full article. Scuffle- to struggle or fight in a rough, confused manner; to go or move in hurried confusion. : Students should not fight, scuffle, or throw objects inside the bus. 2. Quiz section 1. How do we know that Amir still feels guilty and that he fails to escape from his guilt? ...read more.

3. What negative aspects do we learn about the Afghan culture? Traditional Afghan culture is not always positive,and the section gives some comments on the way it treats women. For instance, General Taheri, who is portrayed as the paradigm of Afghan manhood, does not allow Jamila to sing in public, despite the fact that she was once famous in Kabul. Even Jamila, who knows firsthand the limits the culture places on women, exhibits this way of thinking. She dotes on Amir compulsively just because he married Soraya. Amir says he could have gone on a killing spree and she would still approve of him, because without Amir, Soraya might have aged alone, and every woman needs a husband. Implicit here is a belief that a woman needs a man to lead a meaningful life. A double standard exists in the way Afghan society treats men and women regarding sex. 3. Character log Amir: After nearly a year of longing for Soraya, Amir finally gets the nerve to speak to her. Although General Teheri once discouraged him from courting Soraya, Amir eventually succeeds in marrying her. In the summer of 1988, Amir finishes his first novel. He gets it published, and then he and Soraya start trying to have a baby. They are unable to conceive, however, and after numerous tests doctors cannot explain why they can?t have a child. Baba: Baba weakens as the months pass until one day he collapses. The cancer has spread to his brain. Afghans arrive in droves to see Baba in the hospital. At Baba?s bedside, Amir asks if he will go to General Taheri to ask Soraya?s hand in marriage for Amir. Baba goes happily the next day. General Taheri accepts, and after Baba tells Amir over the phone he puts Soraya on the line. The following night, Amir and Baba go to the Taheris? home for the traditional ceremony of ?giving word.? Shortly after the wedding ceremony, Baba dies. Many Afghans whom Baba helped come to the funeral. As he listens to them pay their respects, Amir realizes how Baba defined who he is. ...read more.