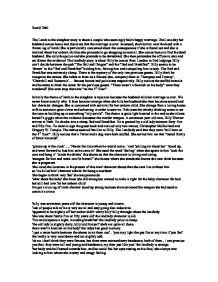 The Lamb to the slaughter - Roald Dahl

Roald Dahl The Lamb to the slaughter story is about a couple who seemingly had a happy marriage. Until one day her husband comes home and discovers that the marriage is over. Incensed, she hits him over the head with a frozen leg of lamb! She is particularly concerned about the consequences if she is found out and she is worried about her unborn child so she proceeds to go shopping as normal. She comes home to find the dead husband. She calls the police and she pretends to be devastated. She then persuades the offices to stay and eat dinner the evidence! The landlady story is about Billy he comes from London to find lodgings Billy can't decide between the pub "The Bell and Dragon" and the "Bed and Breakfast". Billy seems to be 'drawn' to the "Bed and Breakfast" holding him, forcing him and compelling him to stay. The Bed and Breakfast was extremely cheap. There is the mystery of the only two previous guests. Billy think he recognize the names. She refers to them as a famous duo, company them to 'Dempsey and Tunney', 'Churchill and Roosevelt'... ...read more.

'srongest for him and weak one for herself ' she knows where she stands she knows she cant drink because she is preganent 'she loved the luxuriate in the present of this man' character shows that she cant live without him so 'ive killed him' character admits for being a murderer 'she began to think very fast' she was paronoide 'what about the baby' she knew she did wrong but wanted to make it right for the baby character felt bad but still had love for her unborn child Ive got a nice leg of lamb charater stood up strong because she mentioned the weapon she had used to commit a crime 'billy was seventeen years old' the charecter is young and niaeve. 'lots of people talk to' he is very social and easy going also indecisive. 'appeared to be slightly off her rocker didn't worry billy' billy throught about the landlady. 'she was about fourty-five or fifty years old' the landlady charecter is old. 'five and sixpence a night, including breakfast' the landlady price is cheap. ...read more.

While the officers were eating one of the officers mentioed 'problely the murder weapon is right under our very noses' and Mary Maloney giggled. Billy traverls from London to Bath and is looking for a cheap hotel to stay. On Billys way he noticed a Bed and Breakfast. Billy was indecisive of staying at an hotel or an Bed and Breakfast he felt as if he was being force to the Bed and Breakfast. A fourty-five to fifty year's old women welcomed Billy. The price was very cheap. Billys feeling about the lady is that she's 'slightly dotty' a little strange lady. While Billy was signing the book he notice that he knew the two other names that were on the book 'Christopher Mulholland and Gregory Temple'. Dueing tea they discuss about the two men. The lady told Billy that Gregory Temple and Christtopher Mulholland have not left and there are on the thried floor also mentioned that 'there wasn't a blemish on Gregory Temples body'. Later Billy notice that the parrot and the dog were dead. The tea tasted biker for billy were it implies to us that billy was being poisioned also Christopher Temple and Gregory Mulholland were murdered! ...read more.